Here are the busiest Tube station quarter-hour periods, based on the Transport for London 2015 RODS data (modelled, based on typical autumn weekday), used in Tube Heartbeat, adding together entries, exits and interchange stats and excluding Kensington Olympia which does not have a frequent Tube service.

The main pattern shows that stations further out (map) from London’s main work areas (The West End, the City and Canary Wharf) have an earlier morning peak (or later evening peak), due to the journey taking longer and the tendency for many people to arrive at their work-end station at about the same time – just before 9am. A secondary effect is that stations which just act as simple commuter home and work portals, we would expect the usage to peak in the morning rush hour, rather than than evening one, as the morning rush hour is shorter and so the simple commuter flow is more concentrated. Therefore, stations which show a peak in the evening are often due to a combination of this simple commuter flow and an evening “going out” destination.

Station Peaks by Time of Day

You can explore graphs of the flows, in detail, at Tube Heartbeat – just choose the station of your choice on the drop-down on the top right, or click on it on the map.

Interestingly, if you look at the flows between stations, you can actually see SIX rush hours each weekday (you can see five of them below by looking across these sample segment graphs): 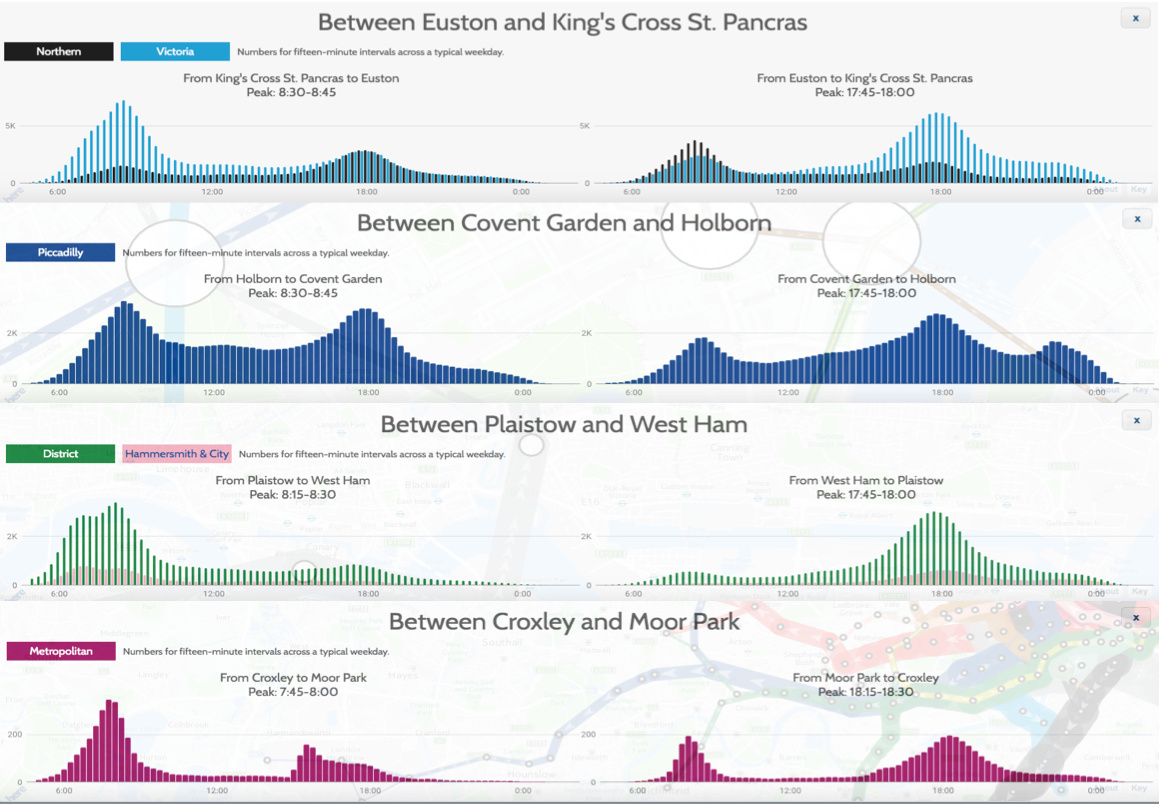 You can also see 3+ rush hours in some of the stations, such as Wembley Central, which shows all six:

You missed out Bethnal Green

Bethnal Green does have its *entry* peak in the morning, but the combined entry+exit+interchange number for 18:15-18:30 is higher than any quarter-hour equivalent in the morning.

[…] busiest average tube times per station have been modelled in incredible detail by analyst Oliver O’Brien, but if you want a basic overview: the majority of central London stations are busiest in the […]