A Census for Open Data in Cities 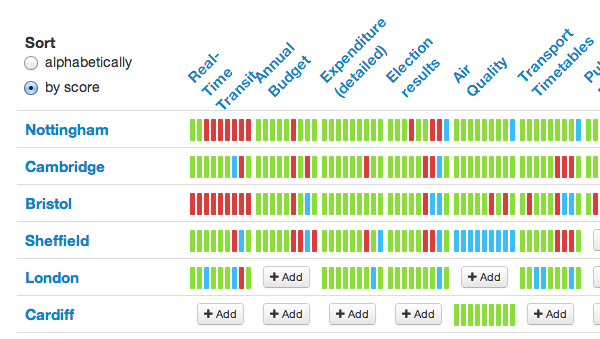 The Open Knowledge Foundation (OKFN) have produced a census for government open data availability for countries around the world, known as the Open Data Index. Each country is assigned scores for 10 attributes on openness and accessibility for each of 10 types of data (such as election results and pollution information). Currently the United Kingdom is at the top of the table.

More recently, OKFN expanded the concept to look at open data for cities within each country, in other words data that is managed at the City Hall level. For example, there is a project page for individual cities within the UK. This time, 15 types of data are examined, again each gaining up to 10 points for openness. The project is still in its information gathering stage so, at the time of writing, only 6 cities have their data partially, or fully, entered. The census for Italian cities, for example, is looking more complete.

Such a census is of great interest when building an application like CityDashboard, which is currently available for eight cities around the UK. Although CityDashboard doesn’t only use open data sources, those which do have documented APIs, open data licences and machine readable formats greatly aid building and expanding a website such as CityDashboard. CityDashboard takes in social media and sensor data, as well as “official” data of the sort that is being categorised by the OKFN project, but some data, such as live running information for metro services, will quite likely always best come from the official sources.

As such, I will keep a close eye on this project. Cambridge and Sheffield look like two promising cities for which the necessary official data is both available and open, which would make implementing them in CityDashboard relatively straightforward.

The census is user-driven and reviewed, so it’s up to you to get information on the availability (or lack) of data for your local city catalogued in the census.

3 responses to “A Census for Open Data in Cities”