Out of Station Interchanges (OSIs) 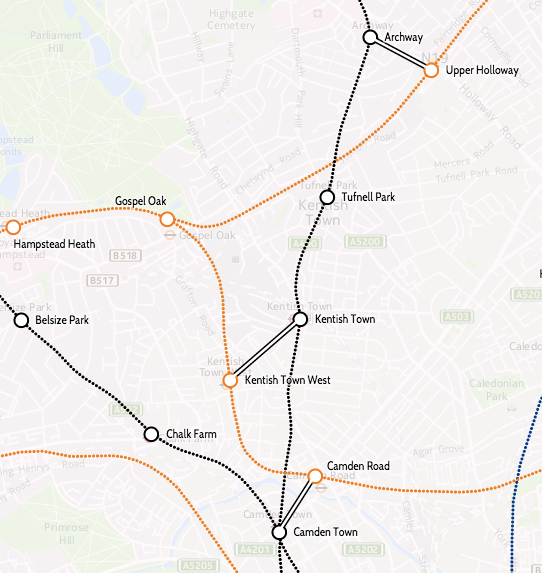 Stations on the tube map with multiple lines are normally shown with a white circle (except where obscured by a disabled access blob) indicating connections where you can change lines there, while continuing on a single journey (and so not have to pay for two). However, there are a number of connections not shown on the map. These are Out of Station Interchanges (OSIs) and generally involve a walk out through ticket barriers, along a road or two, and back through more barriers. However, TfL will do the maths to ensure that you still only get charged for a single journey altogether – so long as you don’t spend too long a time between the two sets of barriers. TfL is quite secretive about these “hidden” free interchanges, likely because marking/highlighting the links and limit times would be tedious* so the current list is maintained by frequent Freedom of Information Requests. I’ve taken the current list, excluded interchanges with National Rail, and added the remaining (TfL to TfL) OSIs to my Tube Data Map. The OSIs are shown by white circles, connected together with white lines and black borders. There are a few more, where I’ve already joined OSI-linked stations as being actually in the same place. Sometimes you can leave and then reenter barriers within a single barriered area – for instance, you can leave the barriers at Bank and go back in them at Monument, without paying for two journeys (so long as you take less than 15 minutes to do so). However you can also get between the two stations while staying behind the barriers. N.B. If you change the date to 2019 then it shows the OSIs that will likely be added for Crossrail, when the central section starts running then.

Many of the OSIs are for links between the Underground and Overground, as the latter network is not otherwise particularly well connected. The longest Tfl-TfL OSI is from West Ruislip to Ickenham, in outer west London – it’s over a kilometre to walk between the two, but the link helps Central Line uses get easily to and from the transport hub at Uxbridge.

* They do however highlight a few at stations, e.g. Clapham High-Street to Clapham north. Some others have some street-signs pointing the way, e.g. Seven Sisters to South Tottenham.

One response to “Out of Station Interchanges (OSIs)”