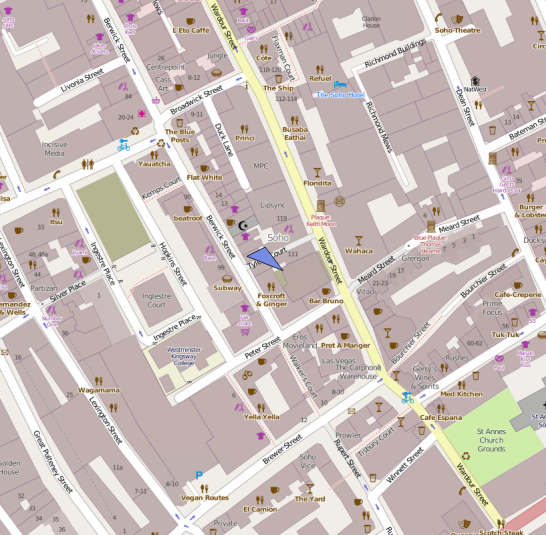 There’s a lot of ways you can define the centre of London.

The Londonist had a good go last month, and CASA geographer Adam Dennett has a shot too, following an article in today’s Evening Standard newspaper.

I offer an alternative definition – the place which is within London but furthest from the Greater London boundary as the crow flies. A few negative Buffer operations in QGIS reveal that this place, 16.77 km or 10.42 miles from three places on the Greater London border (to the north-east, north and south-west), is Tyler’s Court in Soho , just off Wardour Street – see map above. There is nowhere else in London that is further away from its borders. I don’t think my definition is as geographically appropriate as some of the others above (as it is subject to the whims of the meandering London border more than its area or its population), but certainly if you are ever wandering around Soho on a Saturday evening, it feels a long way from the Great British Countryside.

2 replies on “Centre of London – the Debate Rumbles On”

[…] City Centre (bottom) – it’s surprisingly hard to define the centre of London – this pared down yet attractive data-driven map, with useful […]