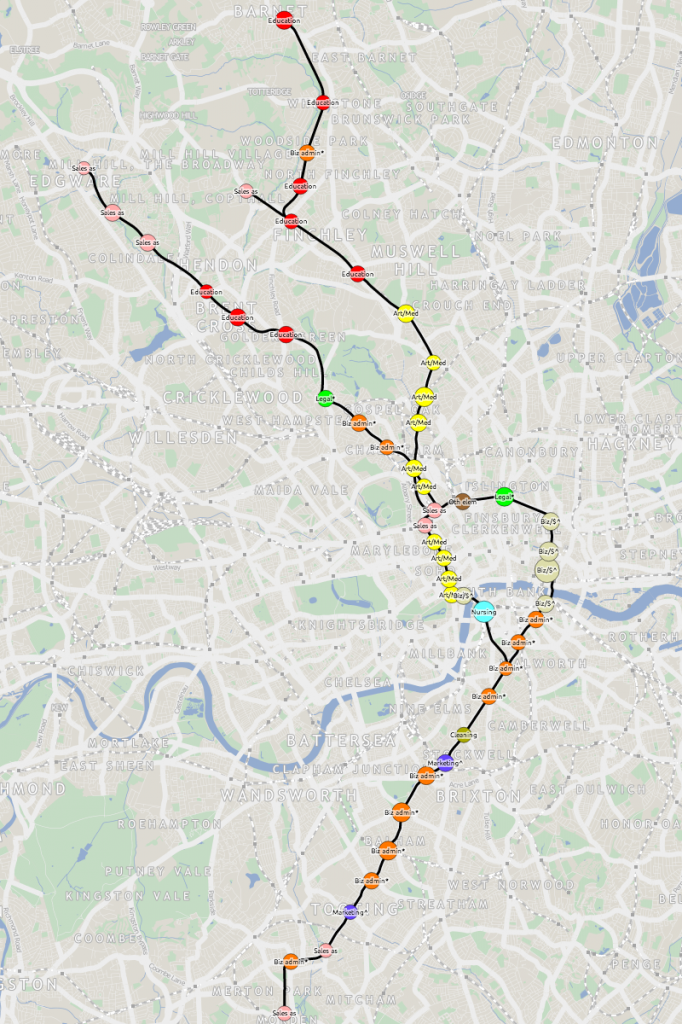 As a followup to Tube Tongues I’ve published Working Lines which is exactly the same concept, except it looks at the occupation statistics from the 2011 census, and shows the most popular occupation by tube station. Again, lots of spatial clustering of results, and some interesting trends come out – for example, the prevalence of teachers in Zones 3-4, that there is a stop on the central line in north-east London which serves a lot of taxi drivers, and that bodyguards really are a big business for serving the rich and famous around Knightsbridge.

The northern line (above) stands out as one that serves a community of artists (to the north) and less excitingly a community of business administrators (to the south). Tottenham/Seven Sisters has a predominance of cleaners, and unsurprisingly perhaps plenty of travel agents live near Heathrow. I never knew that the western branch of the central line, towards West Ruislip, was so popular with construction workers. Etc etc.

Only the actively working population is included, rather than the full population of each area. This makes the numbers included in each buffer smaller, so I’ve upped the lower limit to the greater of 3% and 30 people, to cut down on small-number noise and minimise the effect of any statistical record swapping.

One reply on “Working Lines”

These data generations are absolutely wonderful! From a social science perspective, the clusters are really fantastic to give a visual to information normally in black and white text – outstanding for persons who are more visually inclined. Thank you for your wonderful work!