Dockless bikeshare has been out in London for around 10 months now (not withstanding the brief but spectacular oBike launch and burnout in mid 2016). It looks like the operators are getting serious and trying to get dockless bikeshare to pay for itself – starting a transition from a “growth” to “profit” focus:

Mobike has introduced an out-of-operating-area fee of £10 for London (left). Interestingly, this is only £5 for Oxford (right), where arguably the competition is even more fierce: 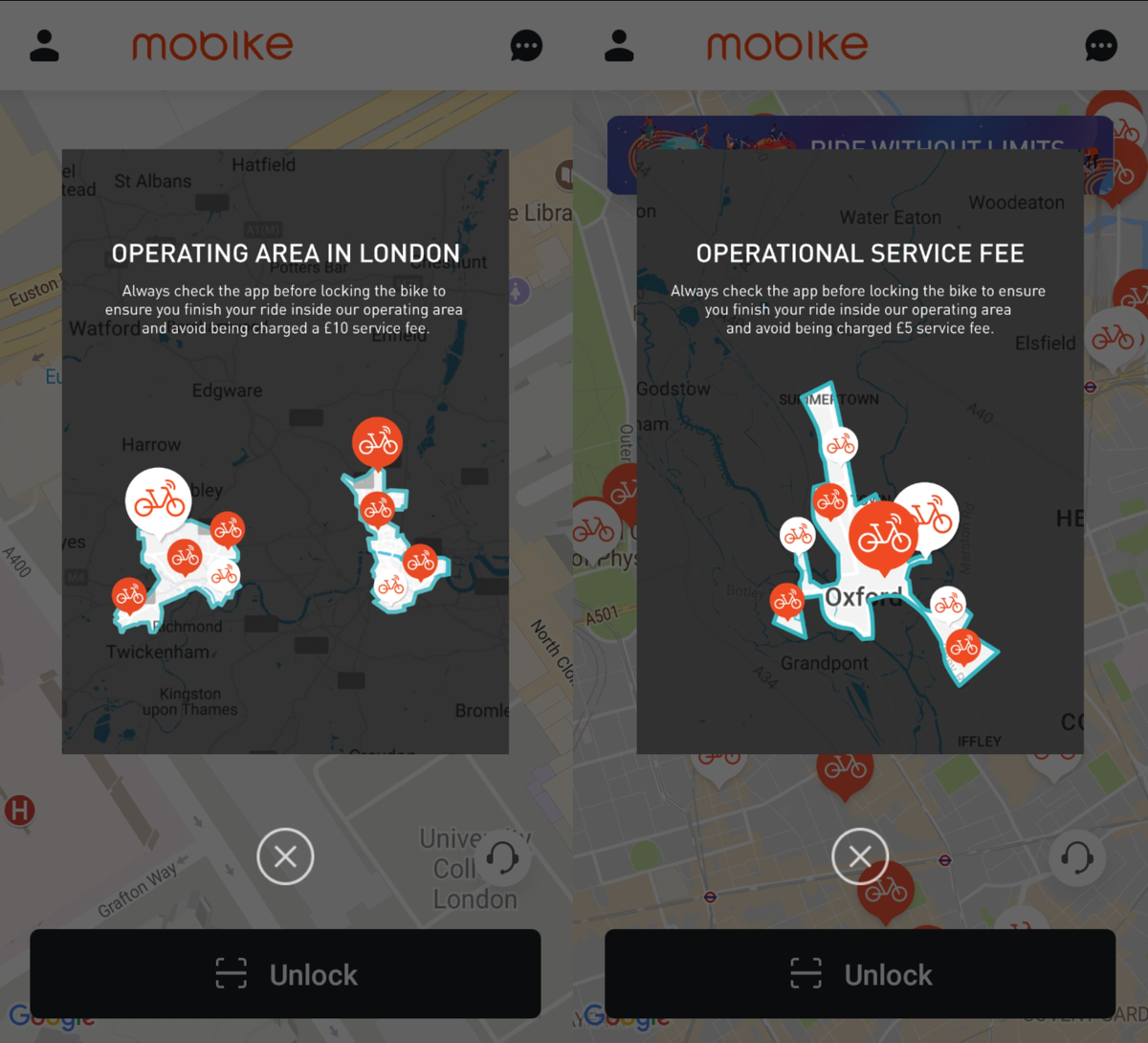 It isn’t clear whether you can continue to start journeys from outwith the operating area, but you must finish within them to avoid the fee. However, you can also get the fee waived by taking any Mobike from outside the operating area, back inside it, within 12 hours. It could be the bike you took outside, or another one. This is interesting – let the user help the system work better. You either fix the problem (bikes outside areas the operator can manage effectively, or don’t have permission to be in) or pay the operator to do it for you.

Mobike is making a bigger deal of its hubs now, showing the numbers of bikes currently available at them. Bikes in a circular buffer around each hub are reported as at the point in some cities (Oxford – left) but individually in others (London – right). This makes them a little more like a hybrid system, with certain locations generally having a reliable pool of bikes available, but with out-of-hub parking still available to keep the system flexible. At this point, there is no user incentive for hub-based journey finishes or starts. 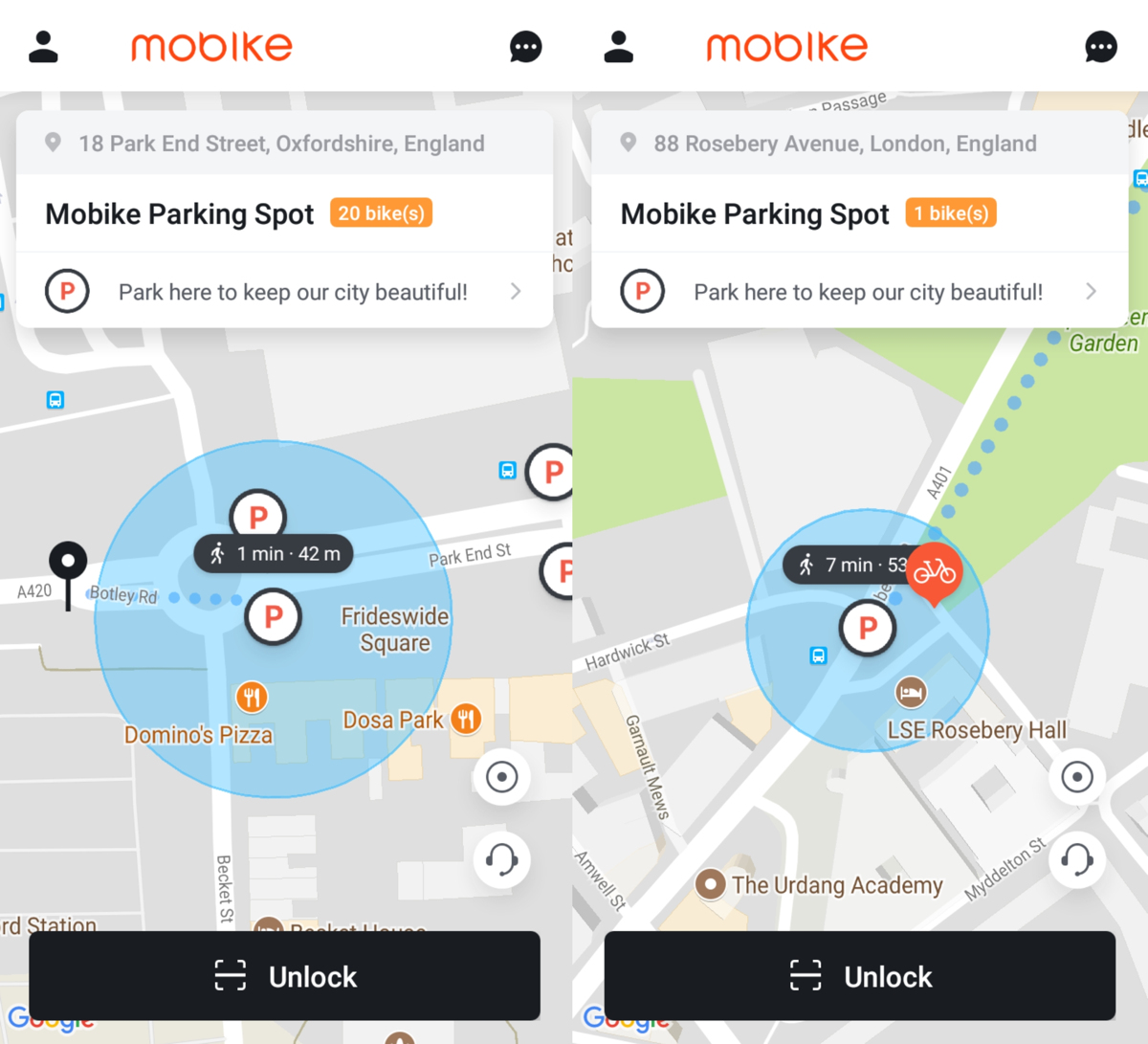 Mobike have also shrunk their operating areas – in Islington, it now doesn’t extend north of Holloway. Presumably Mobike are tired of moving their bikes back up the hill to Archway and Highgate, only to have everyone cycle them back down. However they have extended into a small part of Hackney – the De Beauvoir Town area. They have also shrunk their Southwark footprint, so that the bikes can only be used north of the South Circular, and their western footprint has also shrunk – no service in west Hounslow, Feltham, Southall or Greenford now. They has also completely pulled out of Newham. Looking at their app, it never looked like there were many bikes available for use there anyway. You can see the area of operation here (orange border). 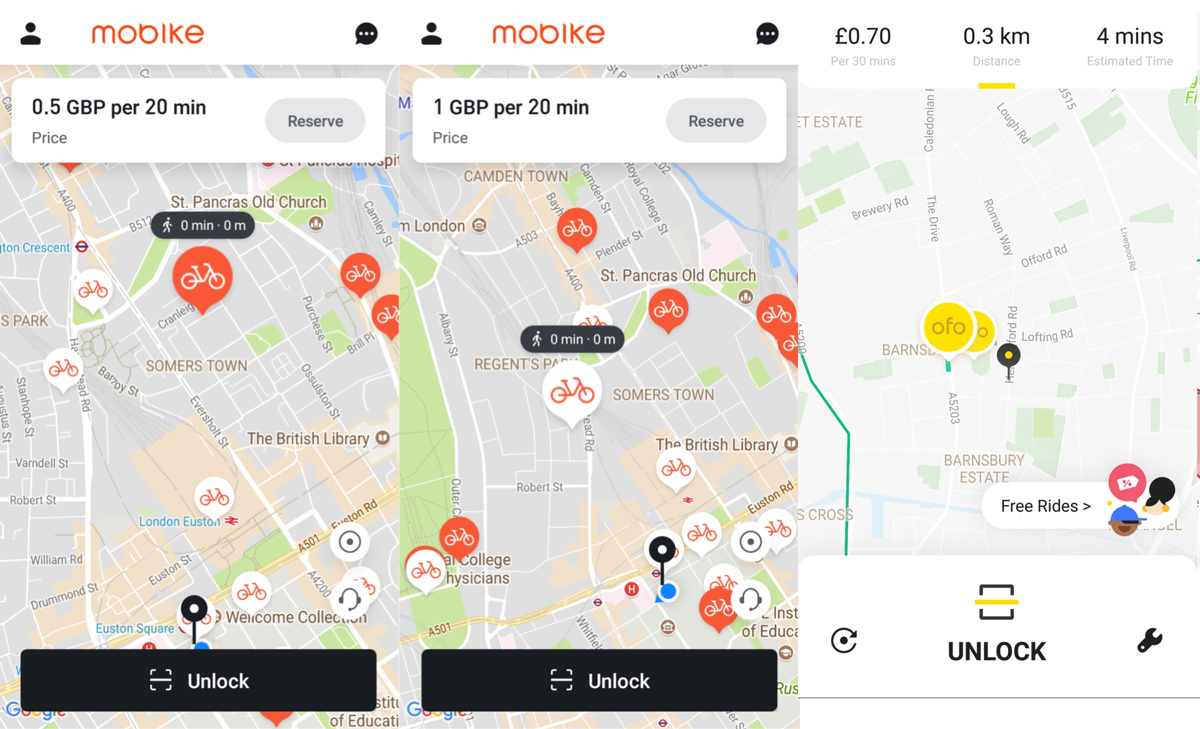 Subsequent Journeys in next 24h

Ofo and Mobike are also now showing specific forbidden areas on their app. This is interesting, because I assumed that all areas outside of their operating area were forbidden. Presumably these are extra-problematic areas for the operators. Ofo has marked various royal parks as forbidden areas, while Mobike has marked canal-sides, the London Bridge station complex, and large public parks, as forbidden. Mobike’s out-of-operating-area areas allow journeys to finish but the user (only) is then encouraged to move the bike back into an operating area within 12 hours, it is locked out of use for others. 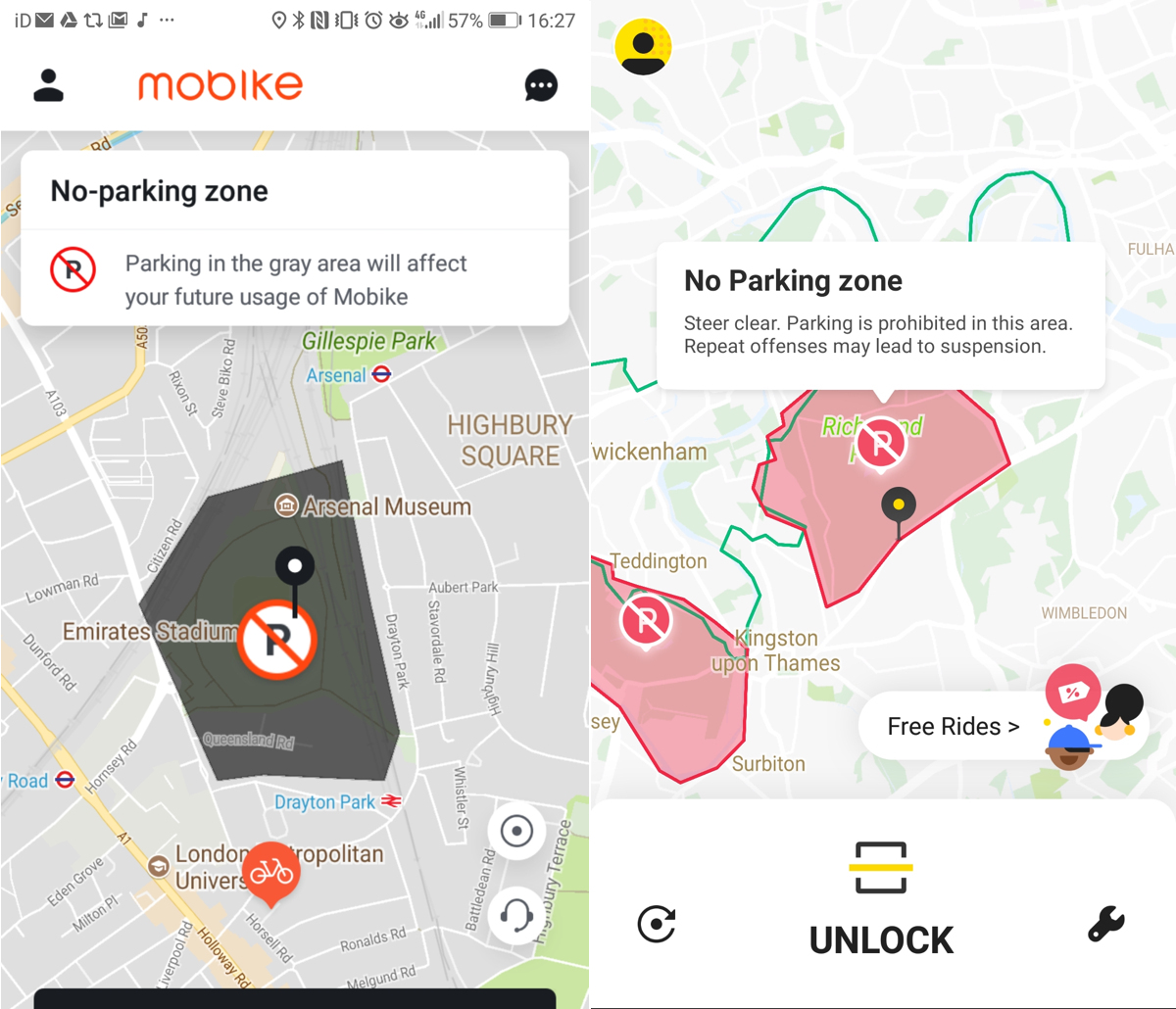 This means that in effect there are five types of dockless system geofences, with four being shown on the maps in the Mobike and Ofo apps:

Meanwhile, the third dockless player in London, Urbo, has announced it is quitting the three London boroughs it is operating in – Enfield, Waltham Forest and Redbridge. Enfield will announce a replacement “soon”, Waltham Forest is getting Ofo in instead, and Redbridge already has Ofo. The numbers don’t sound great – only 6000 journeys in Waltham Forest in 5 months, on a fleet of 250 – so 20 journeys a day, or 0.16 journeys/bike/day, and 3000 miles clocked up in Enfield, again in 5 months, on a fleet of 100 – so (assuming average journey of 1 mile) 0.2 journeys/bike/day. This means these bikes are spending 99.8% of their time not being used (assuming an average journey of 15 minutes).

Barnet had just announced that Urbo was coming there, and Barking & Dagenham was due to sign-off Urbo coming there in July – I would speculate that these launches may be off. Urbo, an Irish company from the start, has just been bought by the operator of several bikeshare systems in towns in Ireland, and it has just launched Dublin, where it has access to the whole of the city. Just like in London, Dubliners likely want to cycle throughout the urban area and not within arbitrary political boundaries. So that would likely be where the London Urbo bikes are going.

Numbers of bikes and journeys are generally hard to come by for dockless bikeshare – the companies themselves have good commercial reasons for being coy with the numbers. In some cases, the operator will have fewer bikes out on the streets than they say – as they just don’t have that many (working) bikes – Santander Cycles have consistently overstated the numbers of bikes out there . The opposite can also be true – where dockless operators have agreed maximum numbers of bikes with boroughs, and then see these numbers be exceeded as users cycle over from neighbouring boroughs, or operations necessitate. There is little data, so we generally have to go on press releases:

Number of Ofos, Mobikes and Urbos in London

I am adjusting the following table as I get better information:

In better news, both Ofo and Mobike are both continuing to expand in London this summer, in areas where they do think dockless bikeshare will work. Mobike should be coming to Haringey soon, while Ofo have today announced their forthcoming expansions – Camden launches this week, with Waltham Forest following shortly (this week, says the borough at least), followed by Wandsworth and Hammersmith & Fulham. This means yellow bikes will soon be appearing in Bloomsbury, Fizrovia, Camden Town, Kentish Town, Highgate, Belsize Park, West Hampstead, Walthamstow, Chingford, Leyton, White City, Hammersmith, Fulham, Putney, Wandsworth, Battersea, Balham, west Clapham and Earlsfield.

One reply on “Making Bikeshare Pay”

Amazing post and I m geographer and it gives me great knowledge.