I’ve been keeping an eye on London’s population projections, and indeed have featured them in a couple of presentations recently – at a TedX event and also a CRUK data visualisation conference at The Crick. By taking the most recent mid-year population estimates for London, and the annual population change, I can simply linearly extrapolate forward to see where it hits 9 million.

When I first put my presentations together, I was working off 2016 mid-year population and population change estimates. Since then, the 2017 estimates are out and have dramatically changed London’s “9 million day”.

Here’s the daily population change in London, inflows and outflows based on natural factors (births/deaths), internal migration (from/to other parts of the UK) and international migration (to/from the rest of the world) – 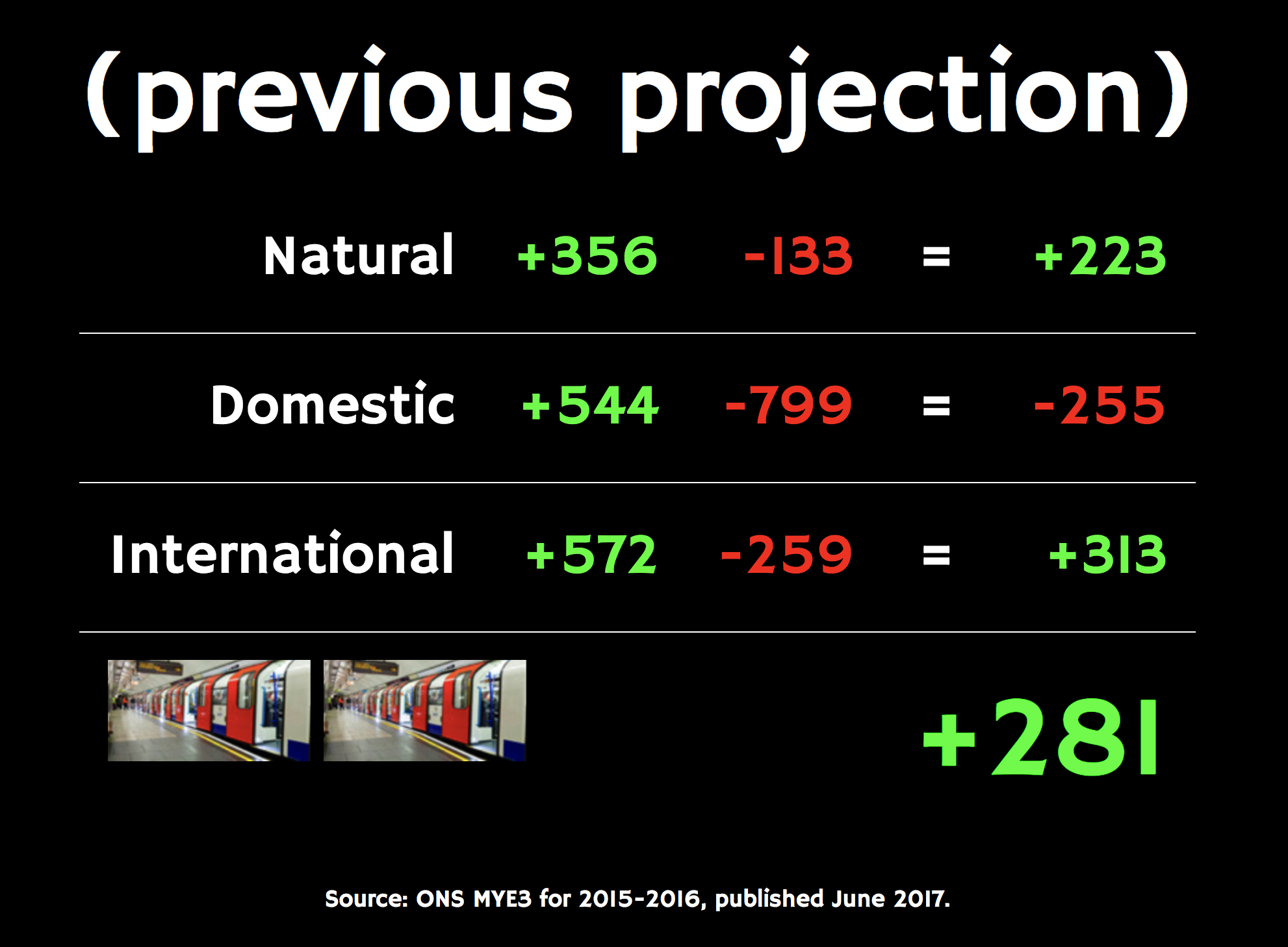 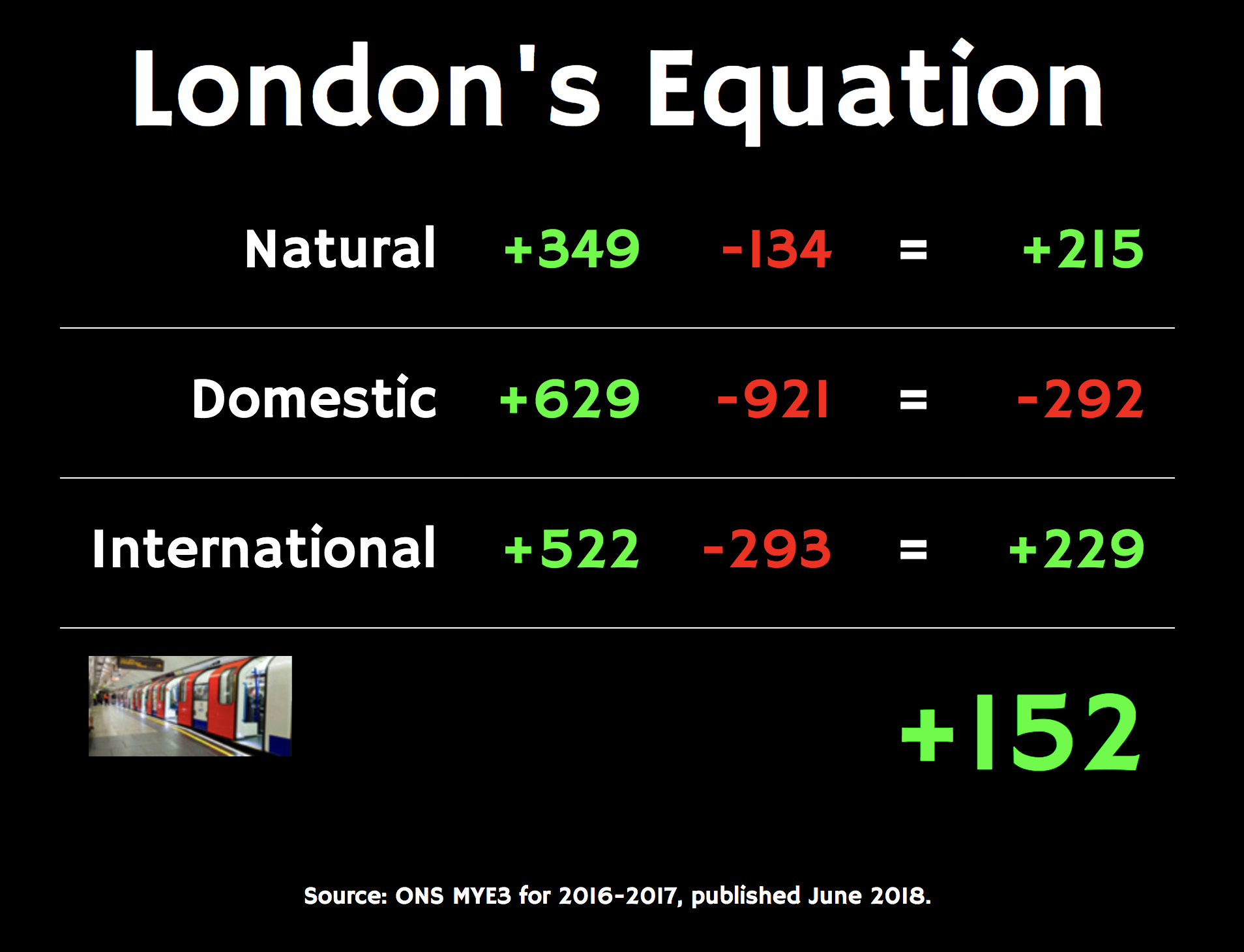 Daily numbers are a simplification – through the year, the rates vary hugely, particularly at the start of the summer holidays and autumn term, where large numbers of interns and students, respectively, move into London. The numbers do however take care of short term migration, as they only reflect those who intend to stay (or leave) for at least a year.

The reasons for the change are not clear, I suspect it’s a combination of Brexit making London less attractive for international migrants, and increases in violent crime, house prices and home working, all three factors making it less attractive for internal migrants (i.e. from other parts of the UK). Or at least, after staying here for a while, people are more likely to move out than try and stick with London as a place to live and raise a family, even if it’s still a good place to commute in to work (or at least, the location of a head office to remotely dial into). 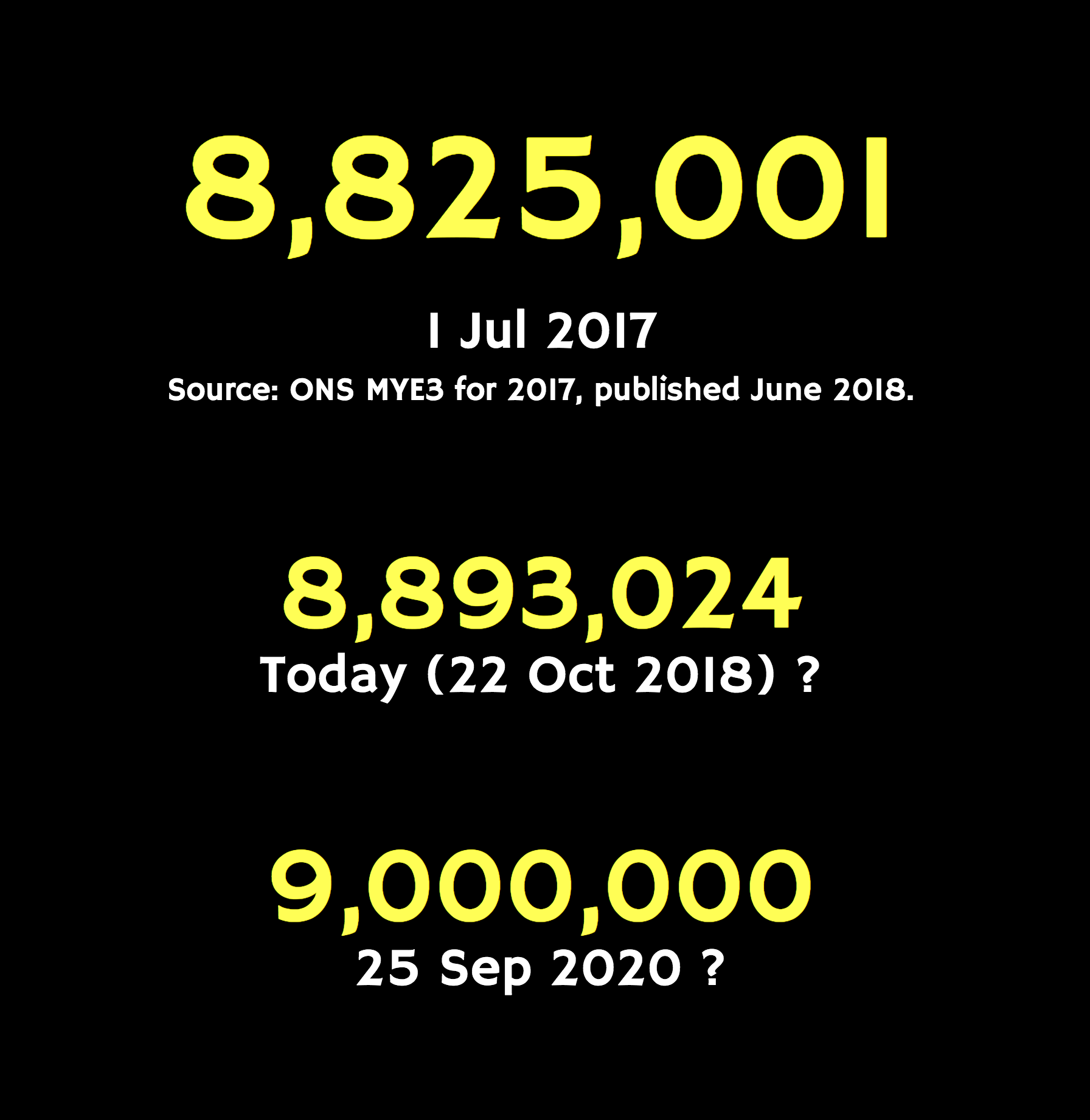 London’s 9 million day was to have been the 27 October 2018, i.e. this weekend, based on the 2016 numbers and a linear projection. Now, it’s moved right back to 25 September 2020. I am sure that a linear projection is an oversimplification, there is clearly a slowdown, and I am sure that the impact of Brexit (i.e. spring 2019 onwards) may further hasten the slowdown – so we will be well into 2021 I suspect before the number is finally hit.

ONS publish their mid-year estimates a year after the date of the estimate, so we can expect to see the mid-2018 estimates and changes, in the middle of next year, at which point I will recalculate the 9 million day again.

Hello, thanks for the interesting blog post. Do you think London’s 9 million day has probably been delayed by Covid-19? It was going to be 25th September this year as you say in this article. Thanks, Andrew

Hi Andrew. Undoubtedly.
The data used to calculate tends to lag by around 15 months, so we won’t see any COVID impact to the calculated data until next year, but even the 2019 data I think has slowed the rate further.

The ONS MYE for 2019 https://www.ons.gov.uk/peoplepopulationandcommunity/populationandmigration/populationestimates/datasets/censusoutputareaestimatesinthelondonregionofengland reckons the mid-2019 population of London was 8.96 million. By that trend, yes we would have hit 9 million population. But I think the effect of many students staying away from university, the culmination of Brexit and COVID making people consider living in less densely population parts of the country, where they have that option available, is not insignificant. So I bet we haven’t hit 9 million yet.