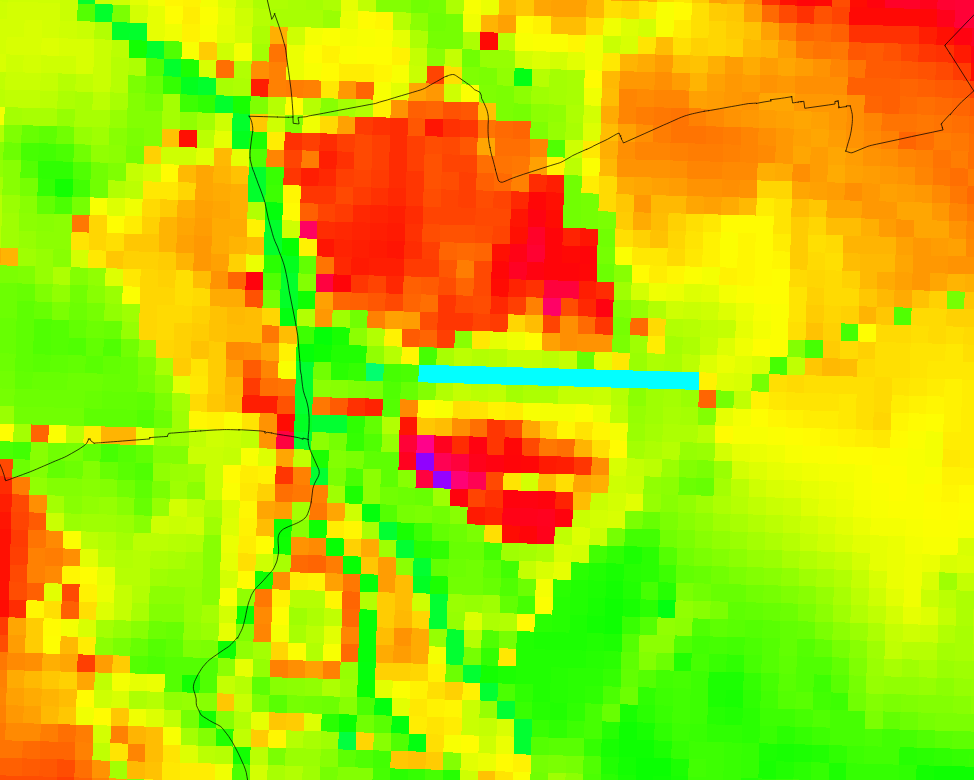 The Diamond Geezer is, this month, climbing the highest tops in each one of London’s 33 boroughs.

To find the highest points, he’s used a number of websites which list the places. These derive the data from contour lines, perhaps supplemented with GPS or other measurements. However, another interesting – and new – datasource for calculating this kind of metric, is OS Terrain 50. Released as part of the Ordnance Survey Open Data packages, it is a gridded DEM (Digital Elevation Model). It’s right up to date, at 50m x 50m horizontal resolution, and 10cm vertical resolution, and it should correct for buildings, so showing the true ground height.

Looking at the DEM for Newham, I think it reveals a new highest point – not Wanstead Flats at 15m above sea level, as Diamond Geezer’s lists suggest, but Westfield Avenue, the new road that runs through the Olympic Park. Beside John Lewis, the road rises, to a highest point of 21.6m. It shows as purple in the graphic above. Nearby, the new “bowl” of the lower part of the Olympic Stadium can be seen, as well as the trench through which High Speed 1 runs, at Stratford International Station.

I can’t argue with the Chancery Lane/Holborn junction as being the highest ground-point in the City of London, at 21.9m. In Tower Hamlets, it’s more tricky. The old railyards between Shoreditch High Street and the lines into Liverpool Street look like they are at 21.7m, however the ground here is not publically accessible, and the DEM is quite noisy here, with only part of the railyard showing this height.

I’m looking for a way to do this programatically – calculating the highest DEM value for each borough. I’ve tried using QGIS’s Zonal Statistics plugin, with polygon shapefiles of London’s boroughs, but this only shows the mean value of the DEM for that borough.

Here’s the list I’ve created by measuring – the main issue with my dataset is that the measurements are only at the centre of each 50m x 50m cell.

[…] Discovered on the London Legacy Development Authority planning webpages while searching for something much more prosaic. […]

If you use GRASS GIS or the GRASS plugins in QGIS, you can use v.rast.stats to calculate max, min, variance and other stats for each polygon.

Thanks Rowan, I haven’t been brave enough to get a GRASS GIS installation on my Mac, in the end James ran it through an R script – v.rast.stats would better as it is happy to consider cells that overlap the boundary (I think – the documentation isn’t great).

There is a certain amateurishness about the existing “official” list, but then it was compiled some years ago, and without access to the Ordnance Survey’s finer-detailed data.

If you do have any further thoughts or evidence about any other London Borough Tops which might be very incorrect, I’d love to know before I set out to visit completely the wrong place!

Hi DG, the problem with my approach is the horizontal resolution is 50m and the measurement is at the centre of the cell, so it can potentially miss small, sharp tops. Anyway I’ve run through the analysis and apart from the two mentioned (Tower Hamlets and Newham) the only other significant anomaly seems to be Camden – I reckon the highest point is on/near Lower Terrace, just off Heath Street, and not on Spaniards Lane.