Cross-posted to the 360 Here blog.

As a follow-up to my intro post about Tube Heartbeat, here’s some notes on the API usage that allowed me to get the digital cartography right, and build out the interactive visualisation I wanted to.

The key technology behind the visualisation is the HERE JavaScript API. This not only displays the background HERE map tiles and provides the “slippy map” panning/zoom and scale controls, but also allows the transportation data to be easily overlaid on top. It’s the first project I’ve created on the HERE platform and the API was easy to get to grips with. The documentation includes plenty of examples, as well the API reference.

The top feature of the API for me is that it is very fast, both on desktop browsers but also on smartphones. I have struggled in the past with needing to optimise code or reduce functionality, to show interactive mapped content on smartphones – not just needing to design a small-screen UI, but dealing with the browser struggling to show sometimes complex and large-volume spatial data. The API has some nice specific features too, here’s some that I used:

One of the smallest features, but a very nice one I haven’t come across elsewhere, is the addition of arrows along vector lines, showing their direction. Useful for routing, but also useful for showing which flow is currently being shown on a bi-directional dataset – all the lines on Tube Heartbeat use it:

The frequency that the arrows occur can be specified, as well as their width and length. I’m using quite elongated ones, which are 3 times as long as they are wide, and occupy the middle half of the arrow (above/below certain flow thresholds, I used different numbers). A frequency of 2 means there is an arrow-sized gap between each one. Using 1 results in a continuous stream of arrows. (N.B. Rendering quirks in some browsers mean that other gaps may appear too.) Here, the blue and red segments have a frequency of 1 and a width of 0.2, while the smaller flows in the brown segments are shown with the frequency of 2 and width of 0.5 in the example code above: 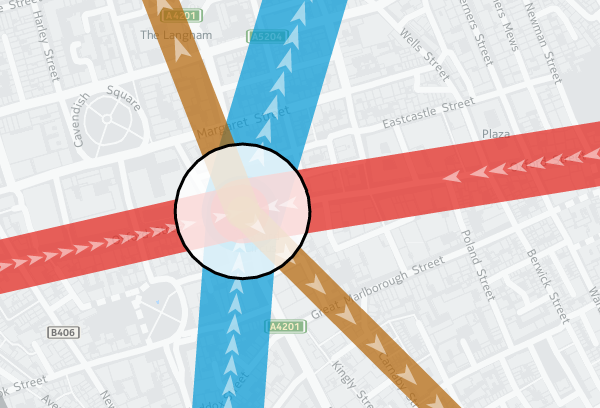 Z-order is important so that the map has a natural hierarchy of data. I decided to use an order where the busiest tube lines were generally at the bottom, with the quieter lines being layered on top of them (i.e. having a higher Z-order). Because the busier tube lines are shown with correspondingly fatter vector lines on the map, the ordering means that generally all the data can be seen at once, rather some lines being hidden. You can see the order in the penultimate column of my lines data file (CSV). I’m specifying z-order simply as a custom object “zorder” on the H.map.Polyline, as shown in the code sample above. This then gets used later when assembling the lines to draw, in a group (see below).

I’m using translucency both as a cartographical tool and to ensure that data does not otherwise become invisible. The latter is simply achieved by using RGBA colours rather than the more normal hexadecimals; that is, colours with a opacity specified as well as the colour components. In the code block above, “rgba(255, 255, 255, 0.5)” gives white arrows which are only 50% opaque. The tube lines themselves are shown as 70% opaque – specified in lines data file along with the z-order – this allows their colour to appear strongly while allowing other lines or background map features/captions, such as road or neighborhood names, to still be observable.

While objects such as the tube lines can be made translucent by manipulating their colour values, layers themselves always display at 100% opacity. This is probably a good thing because translucent map image layers could look a mess, if you layered multiple ones on top of each other, but it means you need to use a different technique if you want to tint or fade a layer. Because even the simplified “base” background map tiles from HERE for London have a lot of detail on them, and the “xbase” extra-simplified ones don’t have enough for my purposes, I needed a half-way house approach. I acheived this by creating a geographical object in code and placing it on top of the layers:

The object here is a very light gray box, at 35% opacity, with an extent that covers all of the London area and well beyond. In HERE JavaScript API, such objects automatically go on top of the layers. My tint doesn’t affect the lines or stations, because I add two groups, containing them, after my rectangle:

I can add and remove objects from the above groups rather than directly to the map object, and the groups themselves remain in place, ordered above my tint and the background map layers. Objects are drawn in the order they appear in the group, the so-called “Painters Algorithm“, hence why I sort using my previously specified “zorder” object’s value, earlier:

There are super easy to create and illustrate the second reason that I very much like the HERE JavaScript API. The code is obvious:

These are my station circles. They are thickly bordered white circles, as is the tradition for stations on maps of the London Underground as well as many other metros worldwide, but with a little bit of translucent to allow background map details to still be glimpsed. Here you can see the circle translucencies, as well as those on the lines, and the arrows themselves, the lines also being ordered as per the z-order specification, so that the popular Victoria line (light blue) doesn't obscure the Northern line (black): 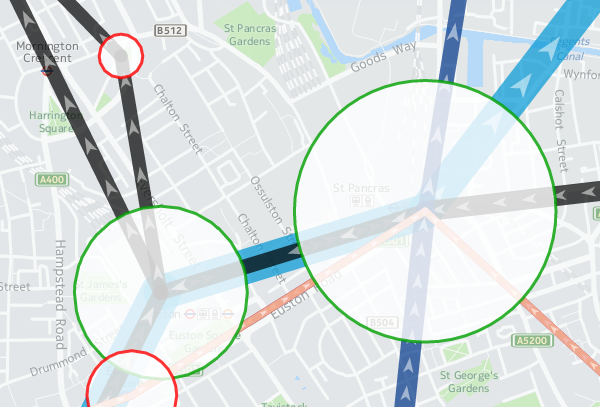 As well as the HERE JavaScript API, I used JQuery to short-cut some of the non-map JavaScript coding, as well as JQueryUI for some of the user controls, and the Google Visualization API (aka Google Charts) for the graphs. Google's Visualization API is full-featured, although a note of caution: I am using their new "Material" look, which works better on mobile and looks nicer too than their regular "Classic" look - but it is still very much in development - it is missing quite a few features of the older version, and sometimes requires the use of configuration converters - so check Google's documentation carefully. However, it produces nicer looking charts of the data, a trade-off that I decided it was worth making:

These are just some of the techniques I used for Tube Heartbeat, and I only scratched at the surface of the HERE APIs, there are all sorts of interesting ones I could additionally incorporate, including some you might not expect, such as a Weather API.

Try out Tube Heartbeat for yourself.

3 replies on “Behind the Code in Tube Heartbeat”

Have you seen this? (mainly the video part) http://www.cambridgeconsultants.com/projects/analytics-see-problem
It’s a very similar thing but perhaps not as sleek! It also lets you click on a station to simulate the effect of a closure and see where the traffic would go (assuming it all stays on the underground network if possible), and interpolates to give a smooth animation through the day. Unfortunately it’s not online as an interactive page though. This was partly made by me at work – my web visualisation skills aren’t very developed but it’s something I’m hoping to do more of!

How did you do the routing? I used an algorithm with TfL’s journey time data as the input to assume everybody took the fastest route between their origin and destination station – I don’t think the dataset includes any information on routes taken.

Hi Ben. I haven’t seen that before – very nice. I particularly like the what-if disruption visualisation – the modelling behind that concept reminds me of a CASA project by Richard Milton & Mike Batty – http://www.spatialcomplexity.info/archives/756

I see you make use of the heartbeat analogy too – I guess it’s it quite an “obvious” metaphor for how people use the tube, as I’ve subsequently come across a third project that describes it as a pulse!

My dataset doesn’t use the individual Oyster journeys with a predictive routing, rather it uses the individual segment flow volumes from TfL’s RODS datasets, between every pair of stations and on each line. It’s at 15-minute intervals so I didn’t need to further interpolate. This data comes from passenger surveys, which capture the route that they take through the network, so no further modelling was needed. See the first couple of paragraphs at http://oobrien.com/2016/08/tubeheartbeat/ for more details.

Do you have any plans to extend the idea to other metro networks? I haven’t found any which have a dataset as rich as RODS, but turnstile data and lower-frequency O/D data is available for some of the big US ones, a similar visualisation by yourself, coupled with the routing and interpolation you did for here, would be fruitful.

That project looks interesting too – the links seem to be broken but I think I found it on YouTube so I will have to watch it sometime. I just discovered the clicking on line segments as well as stations on yours, I like that how you can see graphs of basically anything just by clicking.

I see, so RODS contains lots of extra information, ours was just based on the passenger count data. So the survey includes asking them for their route in addition to their origin/destination, and then TfL do some modelling to work out which section of line they were in at which time.

I guess as a company we don’t have any plans to extend it to other networks, it was mainly to give us something to talk about/demo at trade shows to show that we could take a massive load of numbers, do some analysis on it and visualise it. Having said that, the other third of CC is in the US so they might find a US city more interesting than London.

It would be interesting to see it on other networks if there is data out there. When we started making ours I spent quite a while looking for large free open datasets and TfL seemed to be the best, they don’t seem easy to come by online (presumably because lots of people have realised that they can sell them).