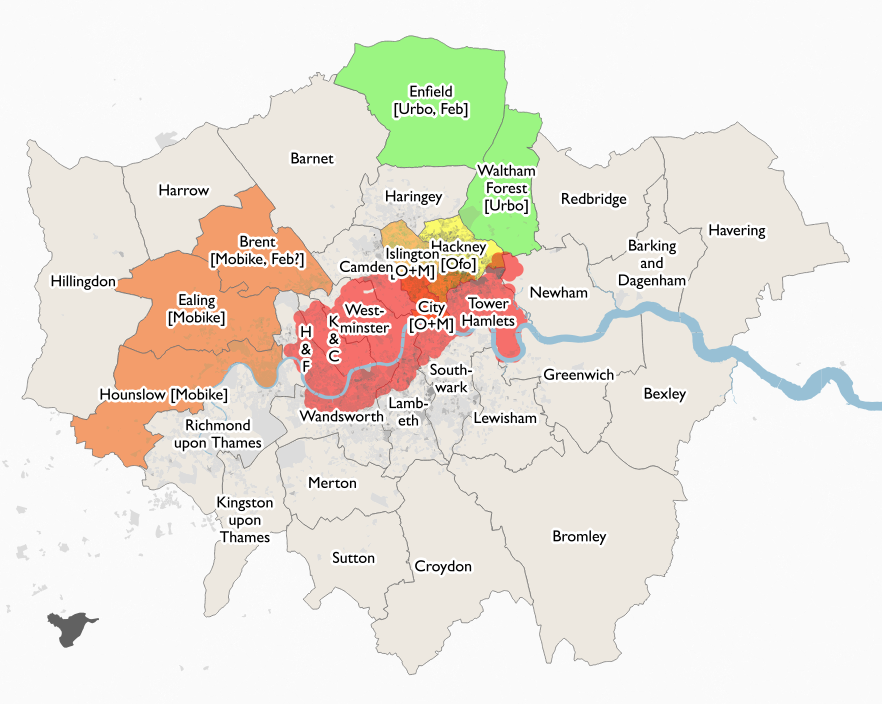 It looks like Brent will be the next London borough to get dockless bikeshare, with Mobike likely to be setting up in the borough within the next few weeks. The operator is not confirmed, although strongly hinted at, including by the council themselves. The choice of Mobike makes sense, as the operator already has a fleet of bikes in the two boroughs to its south, allowing journeys across quite a wide area of west London – although if you want to journey to the centre of the capital on a Mobike, you will still need to finish your journey in Islington or the City, or return the bike back to the three West London boroughs.

Above is my latest map of London boroughs, showing bikeshare provision. The red circles show Santander Cycles docking stations, while the other colours show the spread of dockless bikeshare – yellow (Ofo), orange (Mobike) and green (Urbo). Darker grey shades show areas of the capital with a high proportion of the resident population cycling to work (2011 census).

As well as these maps, I have now published interactive maps of the Ofo, Mobike and Urbo current operating areas in London (for all three) and other UK cities (for Ofo). Ofo were kind enough to supply me with their boundary files, for the others, which define their areas by borough boundaries in London, I have simply dissolved these boundaries. Simple spatial analysis shows the current area, in square kilometres, of these systems. See the “Numbers” tab for the latest numbers.

There are also individual dock maps for other operators in London (Santander Cycles, 110km2) and Oxford (Oxonbike, 8km2).

Operators do not supply consistent numbers of bikes operating in their areas, so I am not currently listing those. Various press quotes suggest 230 Urbos, 1000 Mobikes and 400 Ofos in London, 150 Ofos in Cambridge, 100 Ofos in Oxford and 200 Ofos in Norwich. This numbers likely include significant numbers that are not currently on the streets and available for use.

In parts of Islington, there are noticeably fewer Ofo bikes than a few weeks back, where they were previously very visible on on the main roads, while Mobikes are very visible but lined up in neat, operator-placed rows, rather than in the more organic placement you would expect from bona-fide users. There have been no London usage numbers released by the operators so far, despite having been operating for nearly half a year, which suggests they are perhaps not great. To be fair – it is wintertime and it is still early days.

One reply on “Dockless Continues to Expand – Here’s the Data”

Thanks for the update on deckles bikeshares, and the observation that – “Mobikes are very visible but lined up in neat, operator-placed rows, rather than in the more organic placement you would expect from bona-fide users.”.
Regards, Alastair Majury