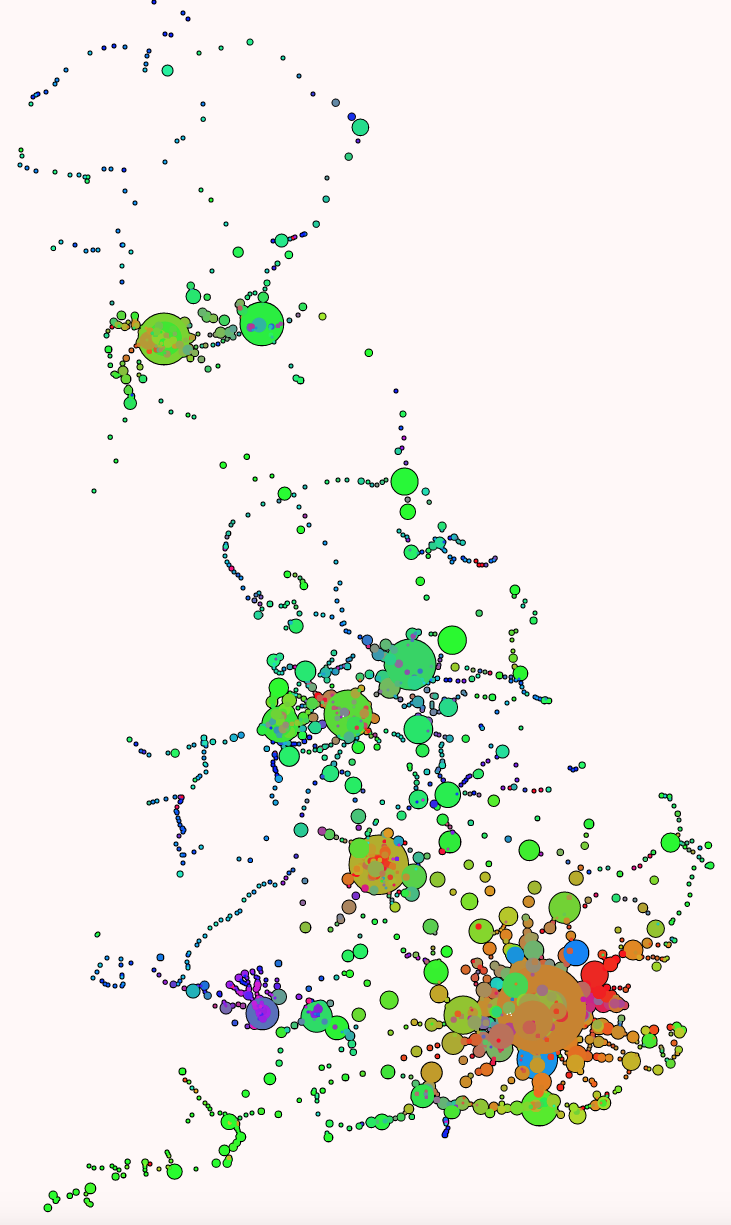 You can click on all the images in this blogpost to go explore each view further on the interactive map.

The ORR publishes station entry/exit numbers on an annual basis, on a “best guess” basis, using ticket sales, gate information and modelling. The data is split by ticket type – full fare, reduced fare (off-peak tickets, tickets bought with railcards, advance tickets, child tickets etc) and season tickets. They make this data available as an Excel spreadsheet, so I’ve crunched it and have produced a couple of maps based on this data. I have also consolidated the total counts and ticket type counts data on CDRC Data.

The first shows the total numbers of entries/exits across the last year that the data is available for (2016-7), with a blended colour, with different red/green/blue strengths proportional to the % numbers for season tickets (red), full fare (blue) and reduced fare (green) entering/exiting National Rail services at that station. The area of the circle is proportional to the total numbers, combined across the ticket types. I’m using a minimum circle size, as otherwise some stations would be practically invisible on the map, as they can see days go by without any passengers – or trains.

Some interesting patterns – blues for many of the airport stations, where off peak tickets generally aren’t available, and most people don’t think to get advance tickets, such as to/from Stansted: 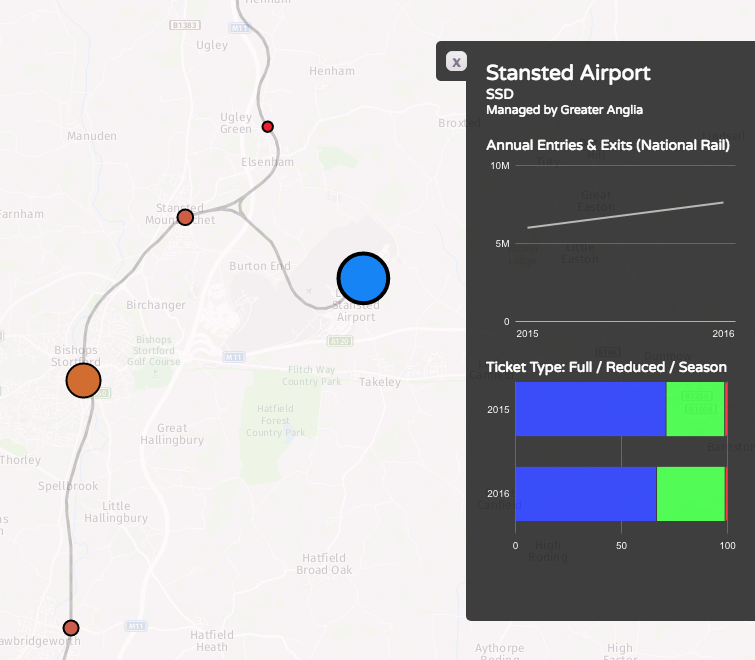 …and almost no-one pays full fare for some of the remotest stations: 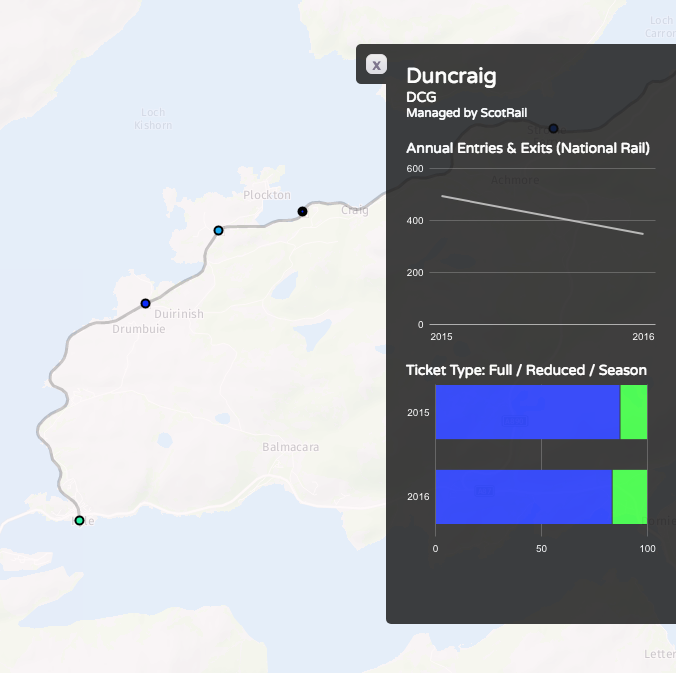 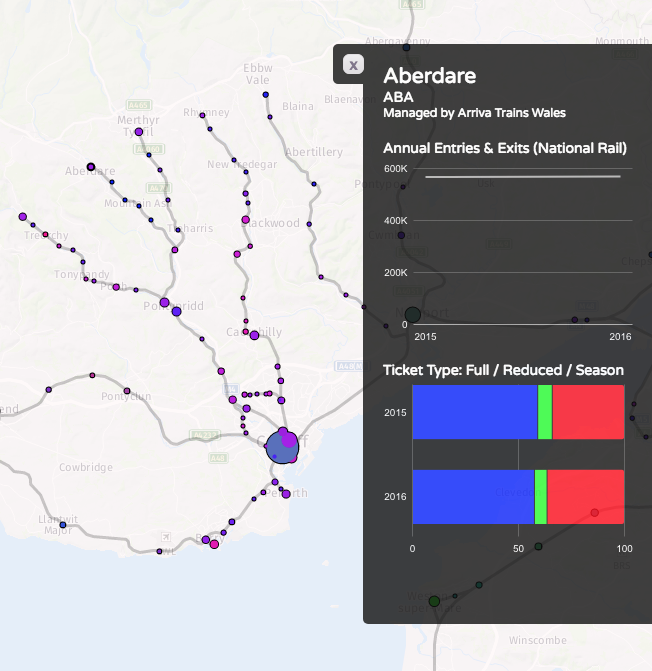 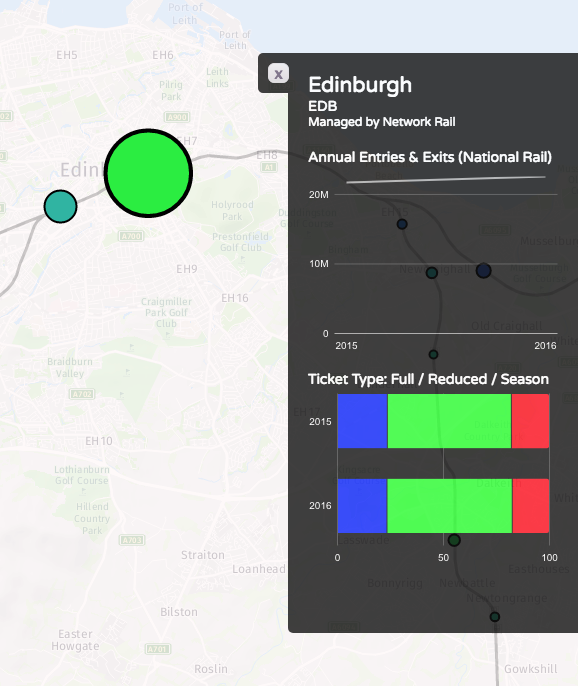 …popular tourist places, where many people will be visiting outside of the rush hours and at weekends, such as Oxford and Bicester Village retail outlet: 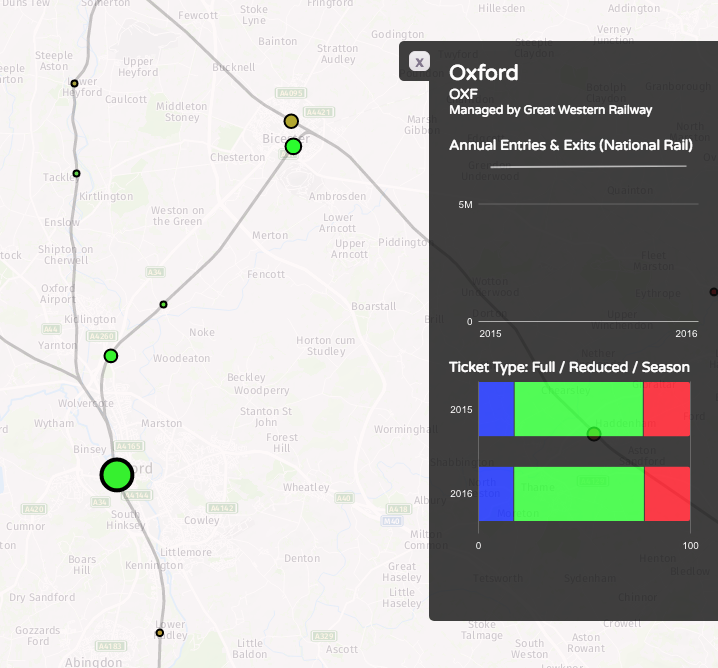 …and areas well covered by discounted travelcards, like Liverpool’s Merseyrail: 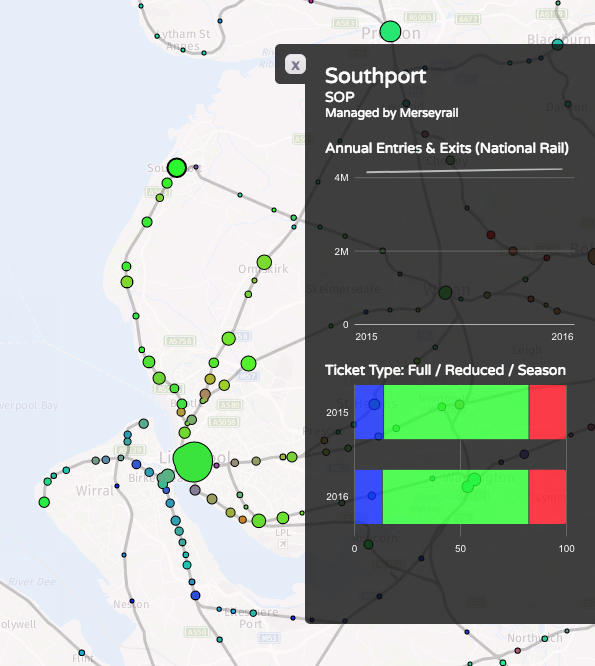 Reds where the season ticket holders dominate, such as Chelmsford and Colchester to the north-east of London: 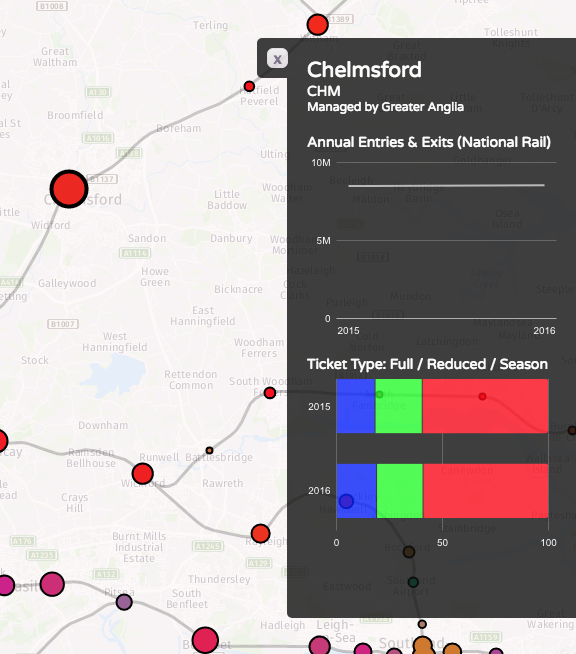 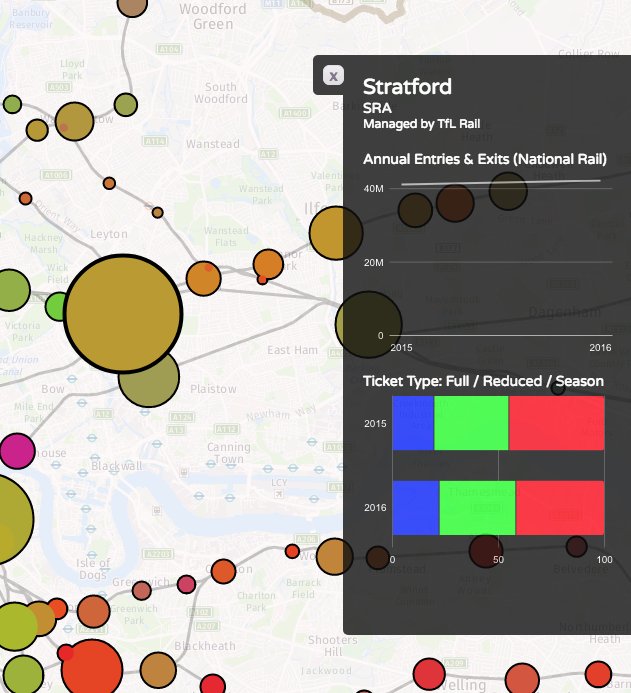 See this map on TubeCreature.

The second map looks at the change in numbers between 2015/6 and 2016/7 (a major methodological change means I cannot use data from earlier years, for a more complete time series). You can view the absolute numbers for both years, but what is of more interest is looking at the changes. The circle fill colour is the % change (with 100% green for a doubling of numbers and 100% for a halving of numbers). The area of the circle represents the absolute change in numbers. The border colour emphasises whether the change is an increase or decrease. Stations with little change will show up as small circles. The biggest trends are the new lines to Oxford via Bicester, and from Edinburgh to Tweedbank. In both cases, the lines were only open for part of the first year, so an increase would be expected even if the day-by-day numbers were flat: 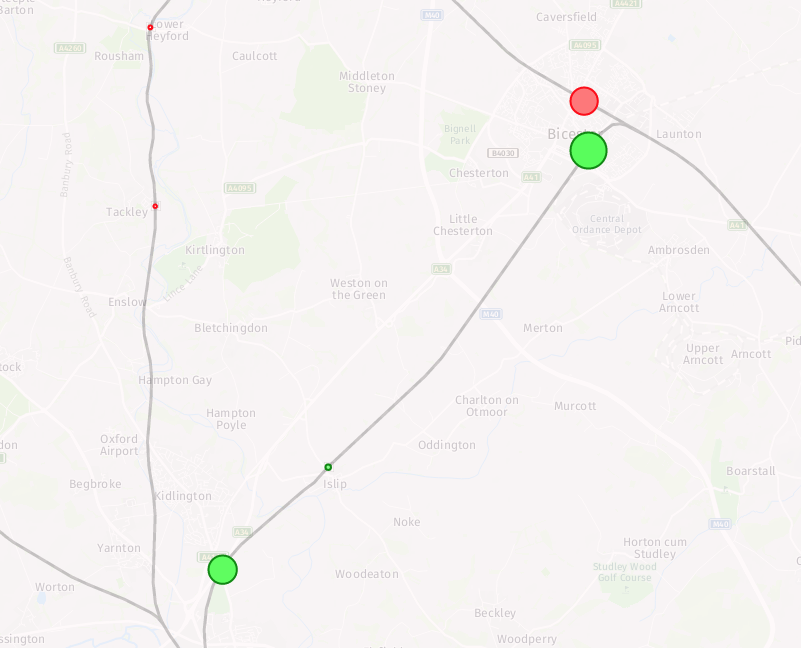 Big drops show in parts of London – the Goblin line having been closed for much of 2016/7 due to a bungled overhead line installation: 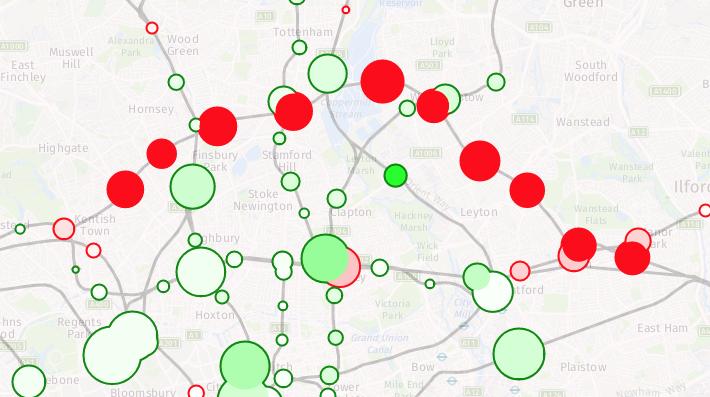 There is also a big drop at Kensington Olympia’s however the source reports says this is due to a methodological change – i.e. it may not have actually been a significant drop at all. This is somewhat puzzling, as there are ticket gates at this station, so in/out numbers should be pretty solid, but it may be relating to due to many fewer people, than previously thought, transferring in-barrier to the sparse District line services at this station. When they do this, they are no longer considered to be National Rail passengers and so have “exited” the station here, from a National Rail perspective.

Most parts of the country see a steady increase (light greens): 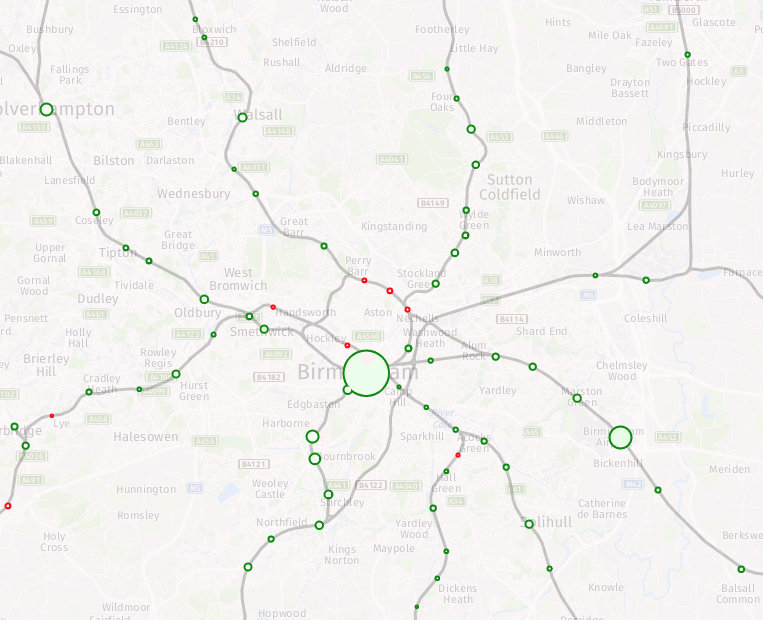 The big exception being area served by Southern trains – with them being on strike for much of the second year, the fall in numbers in this region is almost universal: 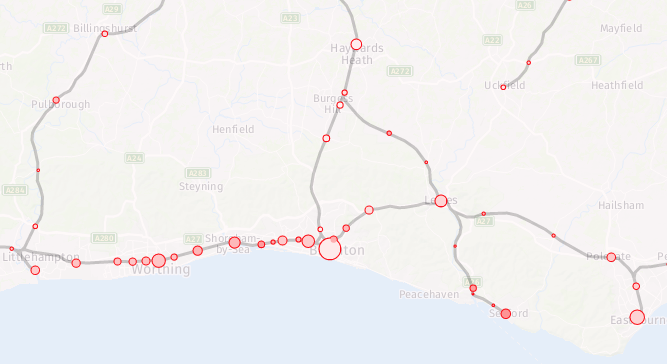 See this map on TubeCreature. You can also download all the total counts and ticket type counts data from CDRC Data.

Good to see the information for my local train stations, Dunblane and Bridge of Allan. With nice and easy to understand information displayed graphically on the maps. Thanks for sharing, Alastair Majury.