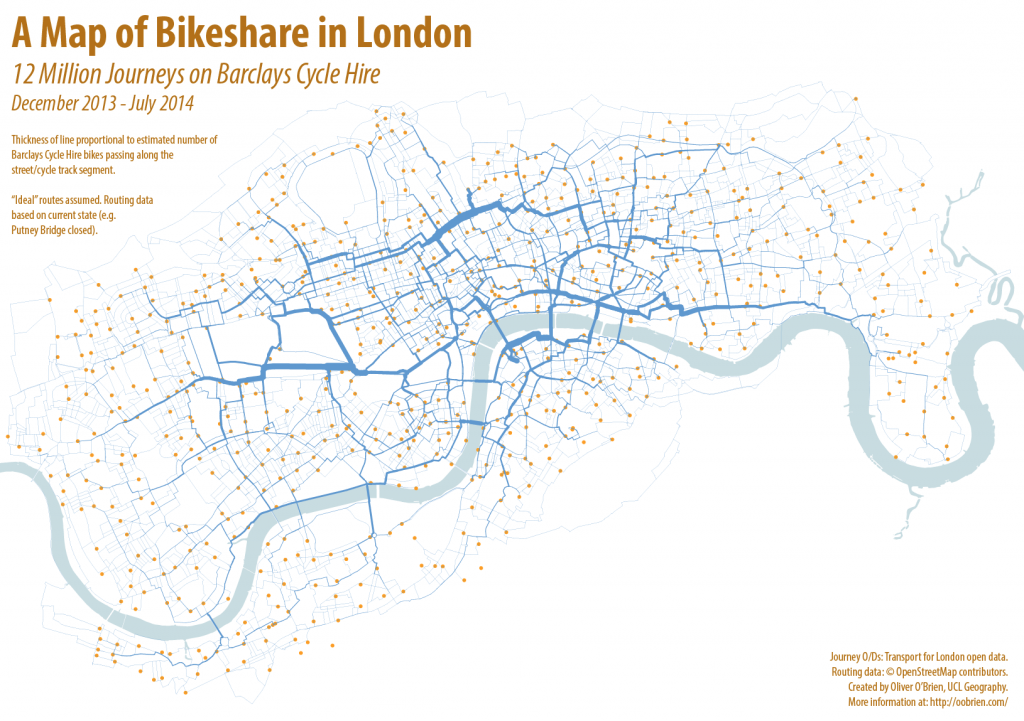 The above graphic (click for full version) shows 12.4 million bicycle journeys taken on the Barclays Cycle Hire system in London over seven months, from 13 December 2013, when the south-west expansion to Putney and Hammersmith went live, until 19 July 2014 – the latest journey data available from Transport for London’s Open Data portal. It’s an update of a graphic I’ve made for journeys on previous phases of the system in London (& for NYC, Washington DC and Boston) – but this is the first time that data has been made available covering the current full extent of the system – from the most westerly docking station (Ravenscourt Park) to the the most easterly (East India), the shortest route is over 18km.

As before, I’ve used Routino to calculate the “ideal” routes – avoiding the busiest highways and taking cycle paths where they are nearby and add little distance to the journey. Thickness of each segment corresponds to the estimated number of bikeshare bikes passing along that segment. The busiest segment of all this time is on Tavistock Place, a very popular cycle track just south of the Euston Road in Bloomsbury. My calculations estimate that 275,842 of the 12,432,810 journeys, for which there is “good” data, travelled eastwards along this segment.

The road and path network data is from OpenStreetMap and it is a snapshot from this week. These means that Putney Bridge, which is currently closed, shows no cycles crossing it, whereas in fact it was open during the data collection period. There are a few other quirks – the closure of Upper Ground causing a big kink to appear just south of Blackfriars Bridge. The avoidance of busier routes probably doesn’t actually reflect reality – the map shows very little “Boris Bike” traffic along Euston Road or the Highway, whereas I bet there are a few brave souls who do take those routes.

My live map of the docking stations, which like the London Bikeshare itself has been going for over four years, is here.

[Update – A version of the map appears in Telegraph article. N.B. The article got a little garbled between writing it and its publication, particularly about the distinction between stats for the bikeshare and for commuter cyclists in London.]

4 replies on “From Putney to Poplar: 12 Million Journeys on the London Bikeshare”

[…] L to R: The Propensity to Cycle Tool (Lovelace R et al, 2017) routed for shortest path, and journeys on the “Boris Bikes” bikeshare system in central London, routed with OSM data to the shortest cycle-friendly route. In […]

[…] as jumps in the numbers of available bikes – to all of Tower Hamlets in early 2012, and to Putney and Fulham in late 2013. Since then, the system has somewhat stagnated in terms of its area of availability, […]

[…] big” which is expensive but the only way to have a genuinely successful system that sees tens of thousands of journeys on most days. It also used a high-quality, rugged system that can (now) cope with the usage – […]

[…] London to focus on improving the busiest existing infrastructure too. Today on my research blog I publish a map showing estimated routes for 12 million bikeshare trips earlier this year. It shows the […]