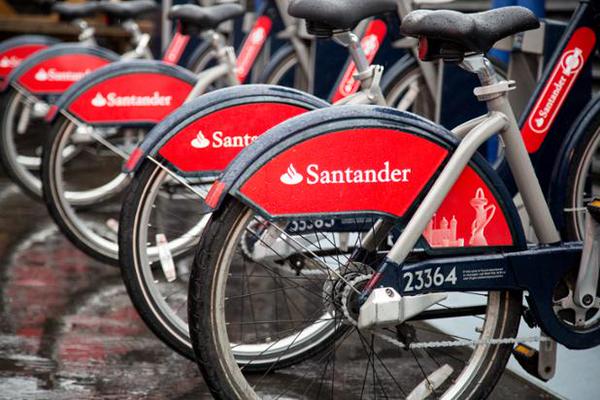 A big announcement for the “Boris Bikes” today, aka Barclays Cycle Hire. London’s bikeshare system, the second largest in the western world after Paris’s Velib and nearly five years old, will be rebranded as Santander Cycles, and the bikes with have a new, bright red branding – Santander’s corporate colour, and conveniently also London’s most famous colour. As well as the Santander logo, it looks like the “Santa Bikes” will have outlines of London’s icons – the above publicity photo showing the Tower of London and the Orbit, while another includes the Shard and Tower Bridge. A nice touch to remind people these are London’s bikes. 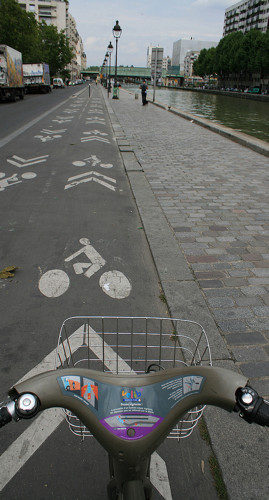 It’s great that London’s system can attract “big” sponsors – £7m a year with the new deal – but another document that I spotted today reveals (on the last page) that, despite the sponsorship, London’s system runs at a large operating loss – this is all the more puzzling because other big bikeshare systems can (almost) cover their operating costs – including Washington DC’s which is both similar to London’s in some ways (a good core density, same bike/dock equipment) and different (coverage into the suburbs, rider incentives); and Paris’s (right), which has a very different funding model, and its own set of advantages (coverage throughout the city) and disadvantages (little incentive to expand/intensify). What are they doing right that London is not?

In financial year 2013/4, London’s bikeshare had operating costs of £24.3m. Over this time period, the maximum number of bikes that were available to hire, according to TfL’s Open Data Portal was 9471, on 26 March 2014. This represents a cost of just over £2500 per bike, for that year alone. If you look at it another way, each bike is typically used three times a day or ~1000 times a year, so that’s about £2.50 a journey, of which, very roughly, the sponsor pays about £0.50, the taxpayer £1 and the user about £1. In those terms it does sound better value but it’s still a surprisingly expensive system.

As operating costs, these don’t include the costs of buying the bikes or building the docking stations. Much of the cost therefore is likely ocurring in two places:

I have no great issues with the costs of the bikes – they are a public service and the costs are likely a fraction of the costs of maintaining the other public assets of roads, buses, railway lines – but it is frustrating to see, in the document I referred to earlier, that the main beneficiaries are in fact tourists (the Hyde Park docking stations consistently being the most popular), commuters (the docking stations around Waterloo are always popular on weekdays), and those Londoners lucky enough to live in Zone 1 and certain targeted parts of Zone 2 (south-west and east). Wouldn’t be great if all Londoners benefited from the system?

Here’s 15 ways that London’s bikeshare could be made better for Londoners (and indeed for all) – and maybe cheaper to operate too:

London has got much right – it “went big” which is expensive but the only way to have a genuinely successful system that sees tens of thousands of journeys on most days. It also used a high-quality, rugged system that can (now) cope with the usage – again, an expensive option but absolutely necessary for it to work in the long term. It has also made much data available on the system, allowing for interesting research and increasing transparency. But it could be so much better still. 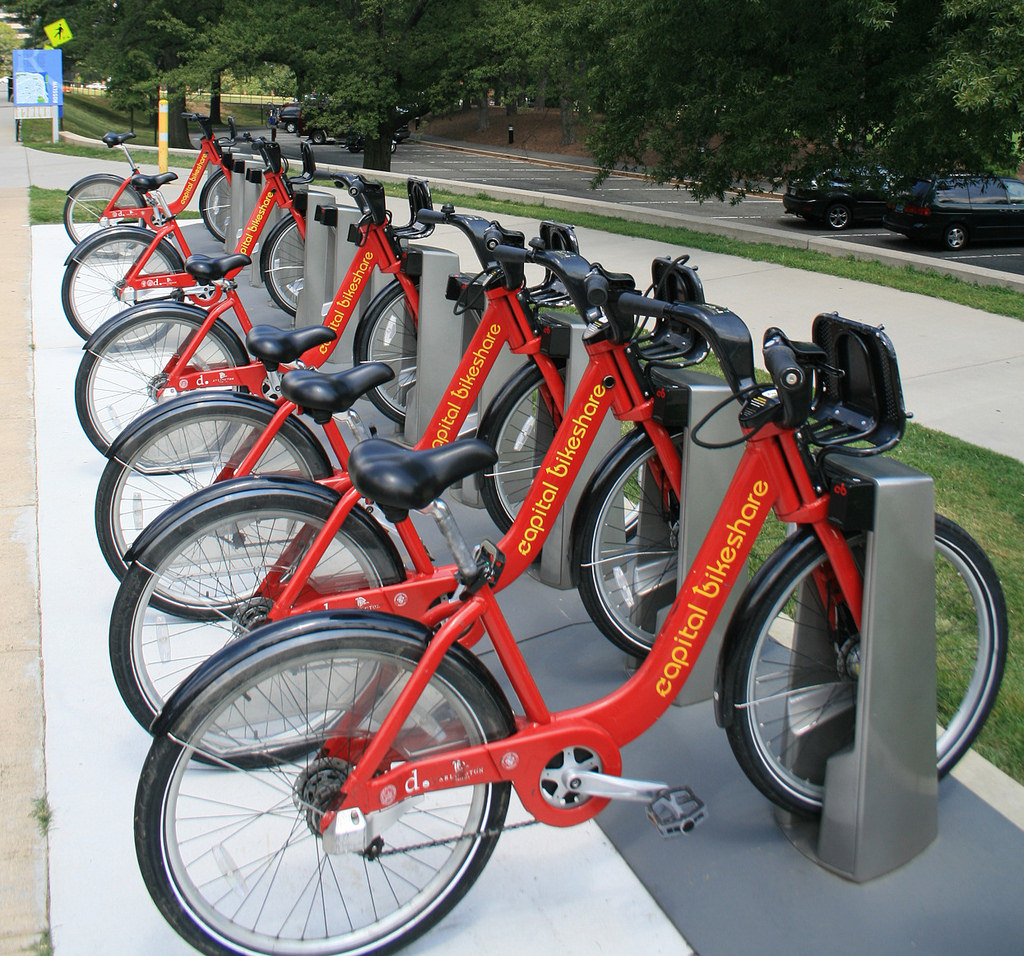 Washington DC’s systems – same technology as London’s, not that much smaller, but profitable.

18 replies on “Seeing Red: 15 Ways the Boris Bikes of London Could be Better”

Thanks for sharing this information and the ideas.
Was just talking yesterday with a friend who mentioned the £2500 per bike, per year figure.
Regards, Alastair Majury

Would be great if there were bikes outside Stratford station, as a lot of people would prefer this method to get to Canary Wharf, instead of the DLR/Jubilee line.
Think the nearest ones are tucked away on the other side of the Westfield shopping centre or about 20 mins walk by Bow Church!
Would also be good if a Travelcard covered bikes too, instead of paying on top of this cost for hire.

The terrain is a factor in this program.
These bikes are built like tanks. I tried to lift one in a dock here in Vancouver, Whoa!, it was heavy, and of course they have to be sturdily built to be serviceable.
But having rented this thing I would not want to be walking alongside it pushing it up relatively minor hills. There are plenty of spots in this city that even on my lightweight road bike with shoes and cleats are a pull that would be impossible to tackle in a pair brogues and a business suit on a hot day on this steed. Your colleagues would certainly not want you in the office afterwards.

thanks for the help

HI Sir, thanks for this. I just visited London for business and used the system extensively. Many of the idiosyncrasies discussed in this article are above my only cursory knowledge but all seem reasonable.

A comment and a question: The maps at the terminals are totally worthless. What is the point of even loading them on the screen if they only show 4 ‘quads’ of London and even then not a single docking station? Why the 5 minute wait between rentals? I was often faced with this in NYC with the two minute rule (which was bad enough) but in a cold, rainy London, it was cumbersome…. You mentioned ‘quarding’. What is the worst case scenario of this and how does the 5 minutes benefit the users more than the obvious punitive aspect for longer rides?

Yes, the maps are not great. The software is “off the shelf” and I guess the original creators weren’t too focused on having useful maps. Re guarding, this was presumably a policy decision at the initial planning stage, when they thought it could be a problem, rather than something that came in to stop the behaviour. I know that other cities don’t have it and don’t have issues, I think. Maybe it is something that could be optimised by only restricting it for the same docking station.

Great post.
I use the system pretty much daily. One thing I find frustrating is the app….it is slow to load, and seems to default to an area that is nowhere near where I am (normally Twickenham!)

Oh…and what IS that luggage rack all about? Useless….the shock cord is like a gym workout and wrecks anything crushable….

Great post. I found the system really difficult from the point of having the confidence that there would be a station close. (I was trying to search for a station around KK!)
The map on the side of the stations is too localised and there’s no call to action to get online, get an app or likewise. So luckily I had data (tourists probably won’t however they’re not the key focus) and googled the company, found a half assed map that showed a whole bunch of ‘pins’ however they didn’t turn out to be stations!
Rubbish experience. The touchscreen was no help either.
Shame.

It also looks like PBSC is still making and selling bike-share infrastructure. Guadalajara launched their bike-share system on Dec. 1, 2014 with 86 stations and 860 bikes made by PBSC.

Regarding the strike Aug 12-13, 2013, I looked up the data on daily trips and rebalancing amounts.

Hi Cyrille, those numbers look interesting – where do you get the rebalancing numbers from? I haven’t seen them published before.

I would add one more. Extend the Scheme into Bermondsey and Rotherhithe. These are the only parts of the central area where the Scheme has not been implemented apart from one lonely docking station in Curlew street close to Tower Bridge. I enquired of TfL about a year ago if it intended to bring the Scheme to this part of London and was advised that there are no plans to do so. This is bizarre when one considers the scheme already extends east all the way to the Isle of Dogs. If anyone is any doubt about what I am saying I suggest they take a look at TfL’s own map showing the distribution of docking stations. They will see a huge gap in the south eastern corner. That is Bermondsey and Rotherhithe.

Thanks Watdanbi – covered by Point 7. The gap is likely because of (a) low modal share of cycling in the area already, TfL would be nervous of introducing it into an area where people don’t cycle as it would take a while for the use to increase, and (b) the barrier of the Thames preventing north/south movements, meaning you would have quite a linear east/west movement, likely bad for natural redistribution/circulation of the bikes, (c) few tourist attractions, so again the main users likely to be commuters which are “bad” for the system due to their highly time-dependent and direction-dependent use. Don’t get me wrong – I think it should definitely expand here. But there are reasons why that hasn’t happened yet.

Point 7 is a no-brainer for Wandsworth – horrendous crush to get on the Northern line and services through Clapham Junction. Have already forwarded your post to the powers that be!

Yes – although the intention was never to replace commuter flows, simply as there are so many commuters and so few bikes. A docking station with 100 bikes would make very little difference to 1000 commuters on a tube line running every 3 minutes.

Good points. I believe a lot of these also apply to the Bicing system here in Barcelona.

Yes – although redistribution is more necessary in Barcelona as the city is on a slope towards the sea – so the morning commute downwards will never be matched by an evening commute upwards. London’s is much more even.