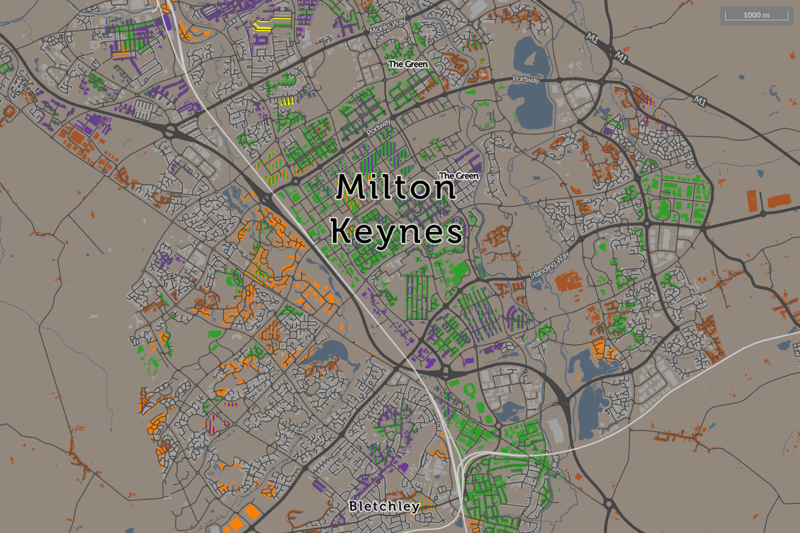 The Refinement: Map Meaningful Results Only (>10%)

I was mapping the second most popular method of travel to work, after cars. But for many areas, there is no sensible second method. Therefore, I was often mapping results for extremely small numbers of people. One person cycling to work while the other 199 drive, in a small area, does not tell us much. The more interesting result is the lack of a strong non-car travel mode. So, I’ve refined the map to remove the colour where it is representing less than 10% of workers. For areas with good public transport options, or a strong tradition of working from home or walking to work, the map is largely unchanged, but for other areas which are sadly dominated by the motor car, the map now shows large areas of grey.

Four notable areas of greyness are Milton Keynes, the Welsh Valleys, Telford and Middlesbrough. In large conurbations, distinct areas appear, such as Walderslade near Chatham, the outer parts of Swansea or the eastern half of Cannock. London changes little, the nearest car-only area being Sunbury on Thames, which is technically just outside London but within its sphere of influence, if not its public transport options.

Additionally, I previously was also showing a “runner up” non-car mode of travel, where this fell only slightly behind the main mapped mode. This additional mode was shown using vertical stripes. However, I’ve tweaked this so that it is instead always included if, like the primary non-car mode, it also represents at least 10% of workers there. This has most effect in London, where buses are in fact widely used right across London, even if the tube/train mode is also heavily used. So London now is mainly composed purple stripes (bus) on top of orange (tube/train). This change also brings out the cycling mode in a number of other cities, notably Hull and Bristol, cities where public transport is well used – and so was masking the still-popular cycling mode.

The New Map: Road Users Only

I’ve introduced a third map, focusing on road travel only – so I’ve eliminated tube/metro use, as well as working from home.

Do the buses beat the cars (remember though, there are more people on a typical bus than in cars), or do the cyclists beat both? Well – mainly it’s the cars, with most cities and other urban areas showing a walking core, surrounded by cars. Inner city areas often have bus use appearing, typically as a second-place usage (I only show here, unlike above, it where it nearly is as widely used as the main mode) in some sectors, but not others. Leeds and Bradford both show this pattern: 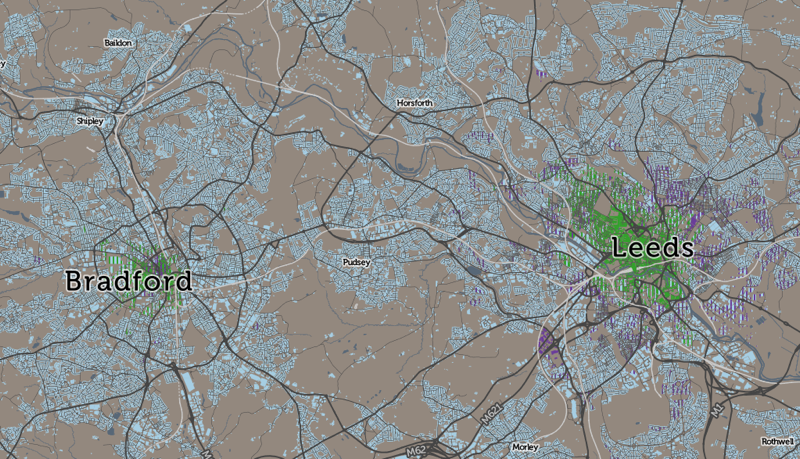 London is the stand-out exception with heavy bus and bike usage, across wide areas well away from the centre. Taxis are also popular with the rich of Kensington.

But in some towns and cities, even the central walkers lose out. Telford is one place with no walking core. Wellingborough/Rushden is another, and Boston. Margate/Ramsgate’s is unusually small. In these places, at least, the car is king of the roads, throughout the urban realm.

Note: Like all the travel to work maps, I’m mapping small-area statistics for the residential location (i.e. home) of people that are of working age. Each small area has a typical working population of around 200 and typically represents two or three average-length residential streets. The maps include non-residential buildings by necessity, as I do not have data to eliminate these, but the colours/stats only represent the nearby residential population, not people who work in these buildings. 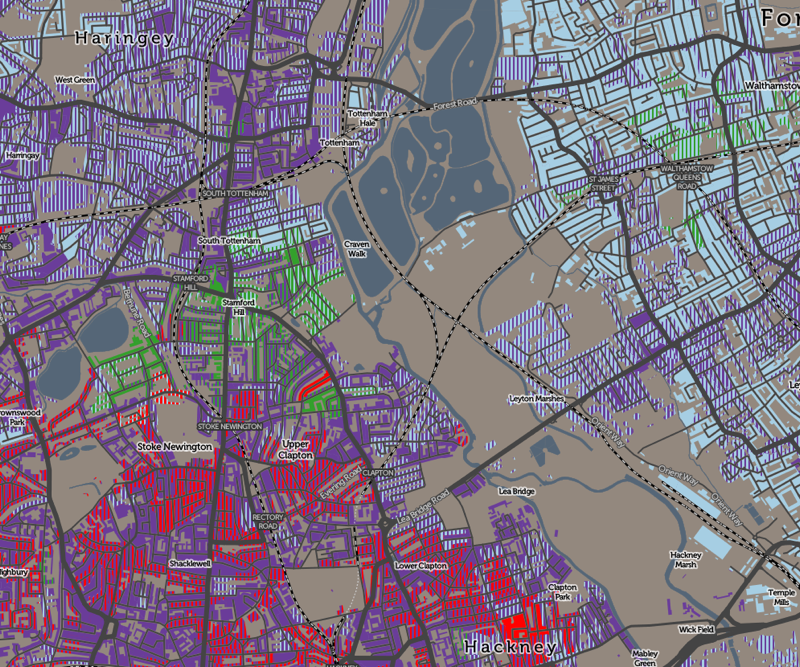 One reply on “The Battle of the Roads”

[…] UK. I’ve reused the “top result” technique that has produced interesting maps for travel to work, to look at the Industry of Employment tables produced by the national statistics agencies, from […]