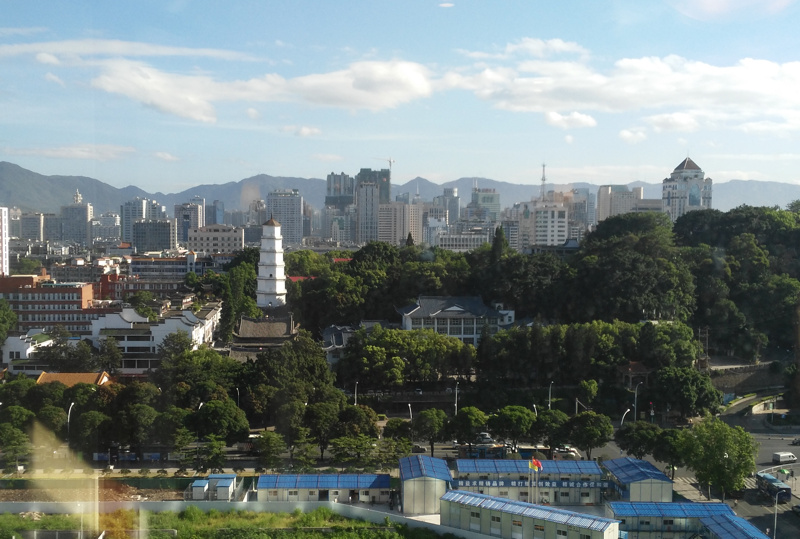 I spent a week in Fuzhou earlier in July, in China’s Fujian provice, presenting and attending a summer school and conference, respectively, at Fuzhou University. I’ve already blogged the conference itself (read it here) but during the week I got plenty of time, outside of the conference to get a feel for Fuzhou and this small part of China. Here are some notes: 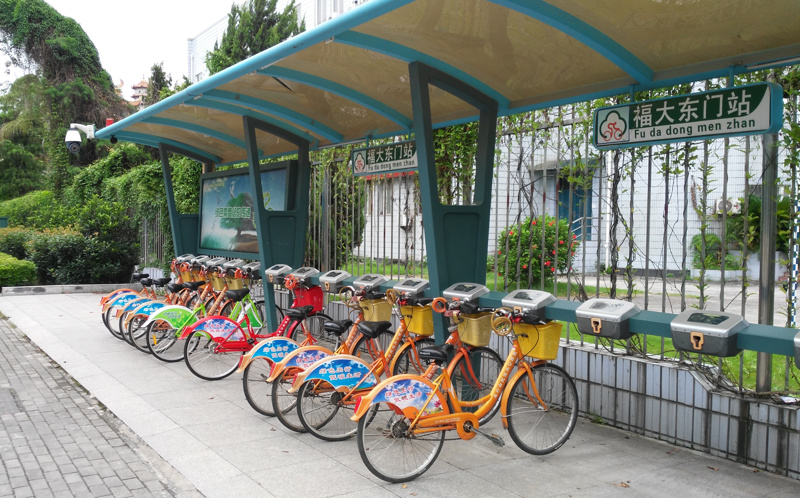 Bikesharing
There is a bikeshare system in Fuzhou, but it is small (by Chinese standards). I saw a few bikeshare docking stations during my trip, in particular one outside the university, which was complete with a (closed) booth for an attendant (I think this is where you get a smartcard to operate it). Each station has 10-20 docks, generally nearly full of the bright orange and green bikes, docked under a bus-stop-style shelter that also contains an alarm light, CCTV and loudspeaker, and red scrolling LED information screen. Adjacent there were typically 10-20 further bikes chained together, presumably for manual restocking by the attendant when they are there. The one thing I did not see, at any point during the trip, was anyone actually using the bikeshare bikes. The modal share of cycling is low anyway in Fuzhou (the roads are intimidating, but this doesn’t stop the swarms of electric bike users) but I wasn’t expecting to see a completely unused bikeshare system in a country so famous for the transport mode. 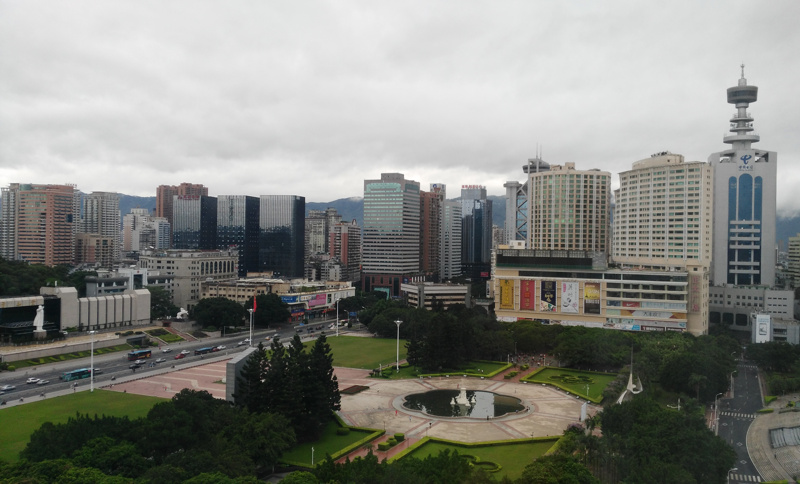 Transport in General
Fuzhou is a city of nearly five million people – half the size of London. And yet it has no metro, tram or commuter rail (apart from a couple of stations right on the outskirts). So everyone travels by car, taxi (very cheap – £1 for most journeys), bus (10p per journey, air-conditioned and frequent), or electric bike. Probably 50% car, 15% bus, 30% electric bike, 5% taxi. Walking is not so popular as the roads are generally very wide and difficult to cross (you don’t generally get much space given to you at zebra crossing!) and likely because of the hot climate at this time of the year. The one mode that I saw extremely little of, is pedal cycling. I had heard that cycling has quickly become an “uncool” thing to do in China, it is interesting to contrast with the rapidly rising cycling use in London – albeit from a low base. London’s cycling mode share was also once much higher and also had a sharp fall – maybe London is just ahead of hte curve. 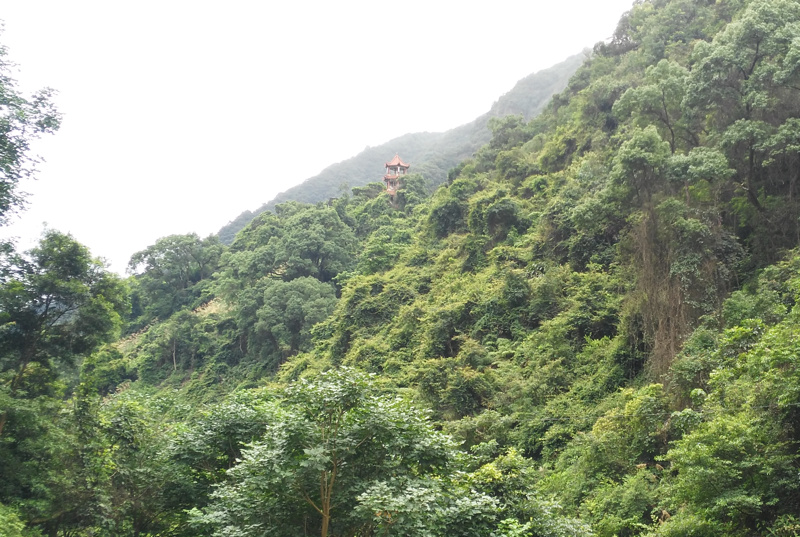 Climate and Pollution
Fuzhou is a southern Chinese city. It’s around an hour’s drive in from the coast, where its airport is. It’s north of the many cities near Hong Kong – about 90 minutes on a plan from the latter – but south of Shanghai, and a long way south from Beijing. The climate is therefore quite hot and muggy at this time of year. As you might expect from a city of five million people where most people drive, a haze of pollution was often visible where I was there. However, the haze is not too bad. Fuzhou is helped in this by being surrounded on most sides by thickly forested mountains, which often rise up steeply, immediately beyond the city limits. One of these ranges indeed forms the Fuzhou National Forest Park which contains a wide variety of trees, including a 1000-year old tree with its elderly branches supported by concrete pillars! The masses of trees on all sides no doubt help with some soaking up of pollutants. Many of the large roads have lines of thickly foliaged trees running along them, and the bridges for pedestrian crossings, and highway flyovers, also have lines of shrubs and bushes all the way along them, which doubtless also help absorb pollutants and keep the haze under control. The street foliage also has the side effect of making many views of the city look quite pretty, with lines of green and purple plants softening the concrete structures and making the city seem to blend into the landscape. 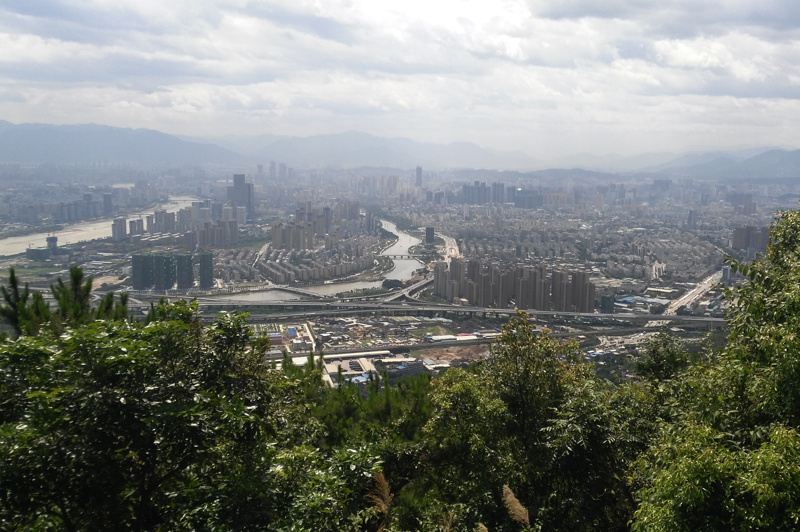 Urban Structure
Fuzhou is a city largely of apartment blocks. Strikingly, the centre of the city has virtually no construction going on – it is as dense it as needs to be, Fuzhou’s population does not need to increase, and the congestion need not get any worse. A few from the central hotel reveals almost no cranes, anywhere on the horizon, apart from some small ones for the aforementioned metro construction project. This is starkly different to the edges of the city, at the few gaps between the mountains, particularly along the road leading to the airport and the coast. There is a brand-new high-speed railway station at this edge of the city, and it also is the direction towards the shipbuilding and electronics industry factories that are a few miles distant. The area around the station is relatively free of apartment buildings, but huge numbers are currently being built, many 30-40 stories high and often built very close to each other, in clusters with distinct designs. The new station and the good road leading outwards it presumably the spur. This is infrastructure building, and developers responding to this, on a grand scale. 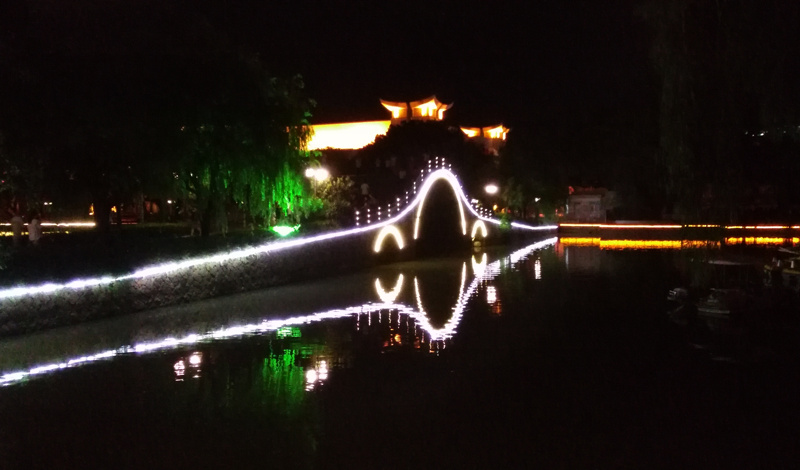 Consumer Culture
One thing I noticed was that most of the Chinese attendees of the conference I was at had iPhone 6 phones. I’m not sure if this is representative of the Fuzhou population at large, but I was surprised to see no Huawei or Xiomai phones (both Chinese brands, i.e. home-grown). I have a Huawei myself – it is excellently built and I am very happy with it. Apple has done hugely well out of convincing people to pay thousands of extra yuan for the a phone with the Apple branding. Talking about luxury brands in general, Fuzhou has a cluster of these (Christian Dior etc) in a small mall in the centre, and also I spotted a Starbucks and McDonalds lurking nearby. But, Apple aside, in general western brands have little impact. And as for the popularity of the iPhone, the (official) Apple Stores have not made it to Fuzhou yet.

More generally, the food in China takes some getting used to, both the variety of produce and also the local varients. Lychee trees are everywhere (the region is where they were originally from) and there were plenty of other unusual fruits. The look of lychees takes some getting used to, but the taste is very pleasant. Fish features in a lot of dishes, as do various meats – the buffet and “lazy Susan” format though thankfully means the more mysterious items can be ignored! Our host also took us to an upscale restaurant where we had a lot of very spicy food (rare for the region) and also some weak but pleasant Chinese beers. 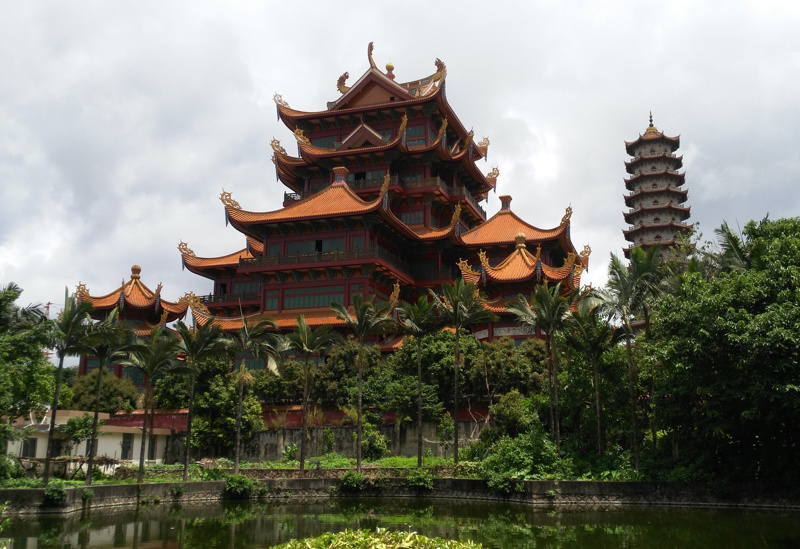